How One Artist Was Able To Transform Her Cancer Diagnosis Into Inspiring Works Of Art | Phyllis...

You are here: Home1 / Features2 / Culture Feature3 / How One Artist Was Able To Transform Her Cancer Diagnosis Into Inspiring...

A cancer diagnosis can bring your world to a halt. It’s a terrifying feeling that can cause anxiety, distress, and depression. But for artist Phyllis Shipley, it presented her with a different way to express creativity. 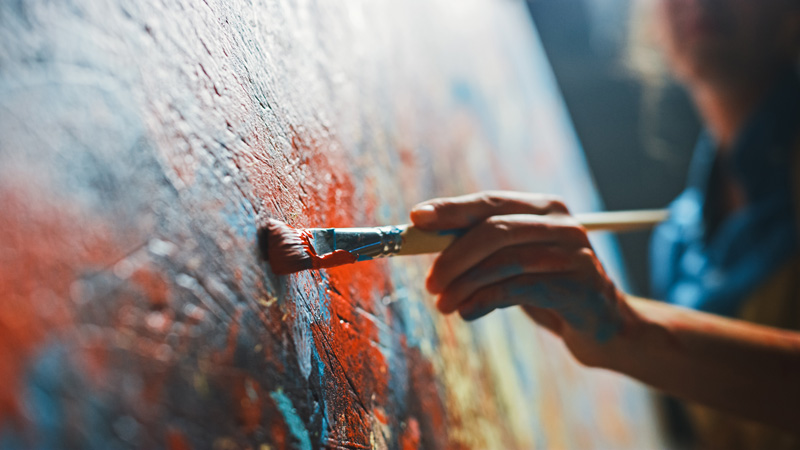 In addition to causing physical damage, cancer can also bring about feelings of depression and anxiety, making even the happiest emotions dreadful. When she received her diagnosis, however, Philly Shipley decided to take her coping methods in a different route. She used her cancer treatments as a way to create dazzling and thought-provoking pieces that encapsulated her emotions during the tumultuous times, all while gaining new perspectives in the process.

“I think that my paintings have been influenced deeply from my cancer. It puts that thought of mortality,” Shipley explained. “You appreciate every little thing, you appreciate daily, mundane activities.”

One of the paintings that was born out of Shipley’s diagnosis is “Windows,” which shows a number of windows — entangled in a vast forest of white blossoms — with the dimly lit rooms illuminating people. Those windows represent the different times in our life, according to Shipley. Meanwhile, the simple, curving bridge at the bottom of the artwork spans over “troubled waters.” “That’s our bridge over the troubles that we go through,” Shipley said.

“That’s really the first time I’ve been that heavily influenced with it. You know, you’re influenced no matter where you go, but this has been a period of time that’s been a total… you’ve been totally captivated, locked into it, really because day in and day out that was all that was on television, always the scare factor and we’ve just been inundated with stuff that we don’t know whether is true or not, so it’s been quite an ordeal.”

Shipley has drawn reference from other current events over the past months, such as the COVID-19 pandemic and civil unrest. “I’ve done several paintings during that [time] that really shows the emotional aspect of how it’s affected people,” Shipley explained.

The artist noted her work “Outcry,” which features a beautiful mashing of dripping colors against a deep blue background that forms the shape of a face screaming out, was inspired by both the virus and her treatments.

While her ability to seamlessly translate real life dilemmas onto the canvas would suggest Shipley has frequently done this before, it’s actually the opposite. Rather, these art pieces represent the first time Shipley has used outside events to provide influence into her creations, as the intense coverage and alluring nature was just too much for her to ignore.

However, Shipley knows those kinds of paintings won’t be ones that will attract the customer’s eye – but that doesn’t stop her. “Some of those paintings are not paintings that someone would want over their couch, so to speak in the commercial aspect of it. But they’re definitely straight from the heart, from the gut.” 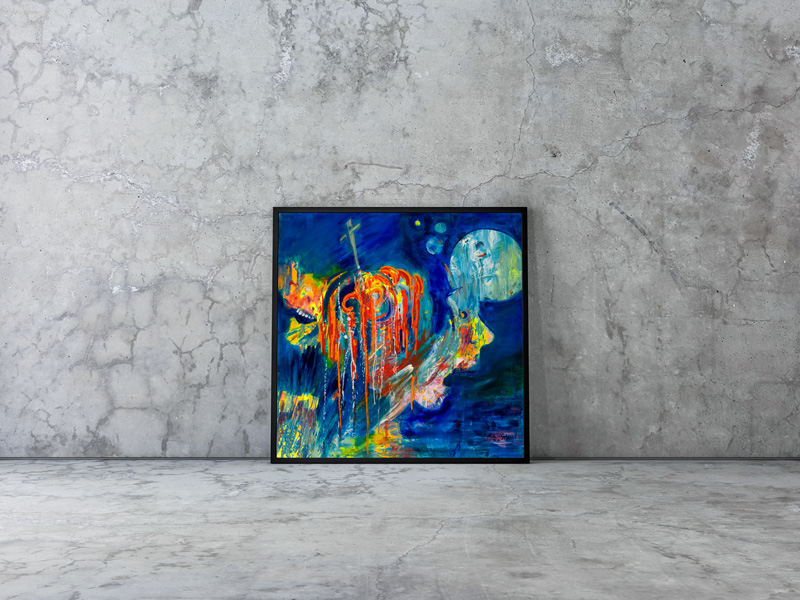 “Whenever you’re a musician, you gotta feel the music as you play it, and that’s the same essence that I get whenever I’m painting. I try to put that expression in my painting. Some paintings, whenever you’re feeling a little low or blue or whatever, that even comes out in your art. Many times I’ve painted some like that and I think, ‘no, I don’t want to portray that emotion,’ so I’ll paint over it and maybe make a happy painting… or something that’s more uplifting.” 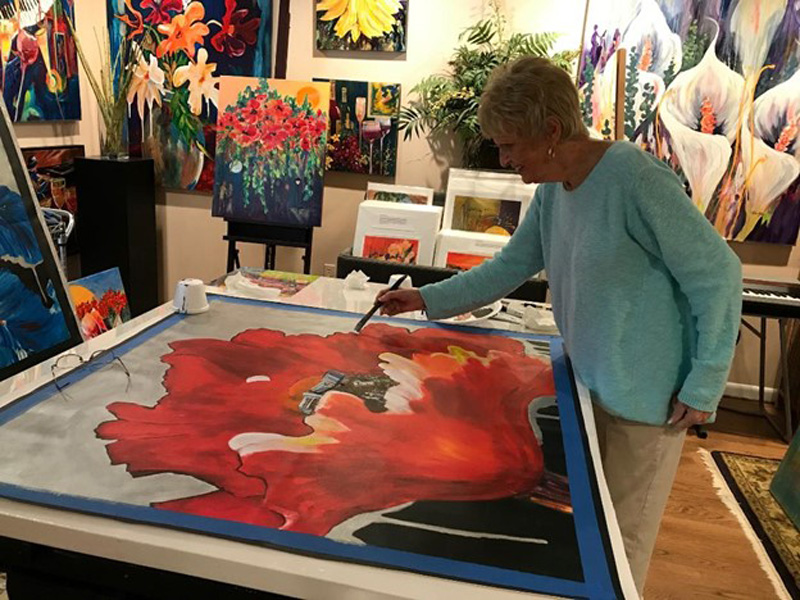 Shipley, a Tennessee native, didn’t become a master of the brush by her own. Instead, she can thank her son for helping her step into the world of art, which would eventually prove to be a crutch in her darkest hour. “My son came home from school one day, probably eight or nine years old, and he had painted a toucan bird in school,” Shipley explained, telling him how good it was and if he would like to take art classes at a local university.

Shipley’s first crack at creating art was an oil painting class, which then turned into more classes – and eventually lifelong relationships, as Shipley’s watercolor instructor became a major influence in her career. “Even though we live thousands of miles apart, I still consider her my mentor.”

Phyllis’ companion plays an inspirational role in her life, as well. “Without him, we wouldn’t be able to do what we’re doing,” Shipley said, noting he encourages her to get her work out there and helps her every day. Her companion is also the author of a book, “On The Road To Inner Vision,” which details Shipley’s growth as an artist.

Painting wasn’t the first form of fine art where Shipley was able to express herself – rather, it was in music, where she played the piano and organ. “I started playing in church when I was 11 years old, so music has been a big part of my life. The inspiration of music just kind of overflowed, I think, when I got into doing my paintings.”

Another calming and spiritual presence for Shipley has been God. “The doors that have opened to me, I always believe when one door closes, another one opens. And I believe that God is in every step of our way, and I truly believe that my trust and belief in Him has guided me where I’m supposed to be.”

Shipley still remembers one distinct moment from when she was in choir. Visiting another Church, she saw a phrase over a door: “Life is not a problem to be solved, but a gift to be enjoyed.” It’s not hard to tell Shipley infuses that saying within each of her pieces.

“Most of the time, whenever I sit down to paint, I have no idea what I’m going to paint. I’ll start with colors and shapes and things like that, and as I paint, my inner vision comes into play as to what I feel and see, or see and how I interpret what I see on that blank canvas.”

Shipley’s bursts of colors and storytelling abilities are able to creep their way into many of her pieces across different styles and subjects, which she says much of her audiences notice and love. “Most of the people say the dynamics in color, that it’s uplifting and they can read a story in my paintings. I think every artist tries to put their expressions on the canvas.”

When it comes to the subjects of Shipley’s pieces, flowers — which she refers to as “symbols of strength, delicacy, and beauty” — are the name of the game. Growing up, Shipley’s childhood was full of blossoms, as her aunt, mother, and grandmother all possessed bountiful gardens. Her floral artwork draws in much of her audience, thanks to her colorful pieces’ abilities to brighten up a room. “They talk about all the time [how] they love my florals. I’ve always been kinda known for my florals. And then I had a music series, my jazz series. And that’s been received really, really well.”

For every artist, the first step of the creation process can greatly vary. In Shipley’s case, she rarely possesses a desired idea heading into her painting sessions. Rather, she lets her senses and immediate surroundings evolve into something she likes – a technique she’s found to be extremely fruitful.

“One time I was over in Anna Maria islands, and we were on the beach. There was a beautiful palm tree and of course, being from Tennessee, the palm trees always fascinate me. I started painting this palm tree, and these eyes came out behind the palm tree and I could visualize them,” Shipley said. “So I made the palm leaves her hair, and I called her ‘palmetto girl.’

“It’s just things like that, whenever I’m painting, I may start out not even really thinking of something, and then visually feel or see something and then it may turn into something else.” 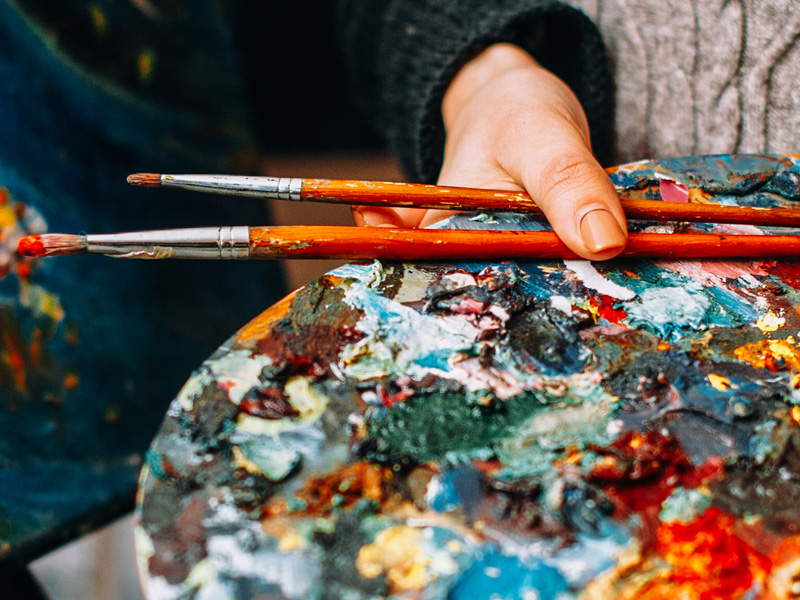 Even with having decades worth of experience and skills under her palette, Shipley still understands the value of keeping up with new trends and taking pointers from other artists in order to keep up the love for her work. 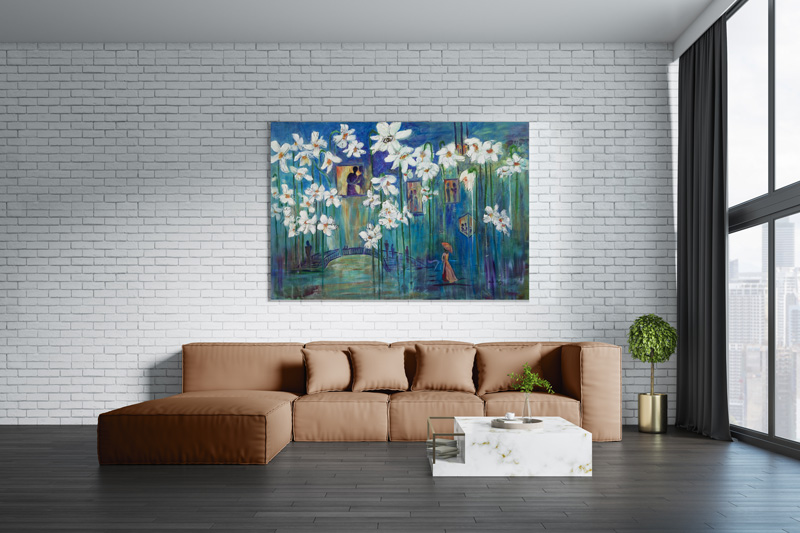 “Oh yes, you have to [learn new skills]. If I painted the same thing over and over and over again, I’d be bored to death. You just learn new ways of doing things and learn from other people and incorporate what you do into something that you saw them do that flashed ‘oh, I’d like to add that to this.’”

Despite the various trials and tribulations that have attempted to steer her off course, Shipley has never lost sight of what creating art is all about: the joy it brings to both her and her audiences. While she does acknowledge the monetary gain is important when it comes to recouping expenses spent on supplies and marketing — Shipley terms it a “vicious cycle” — she defines success as seeing her work go to someone who enjoys it.

“Success for some people would be ‘[I] sold that painting for 20 grand.’ Yes, that is a success, but I feel like I’m successful when someone purchases one of my pieces because they love it. It doesn’t matter whether it costs $500, $5,000, or $10,000.” As long as Shipley is able to see pure delight in the faces of her customers, she’s more than content.

That theme of happiness is what Shipley also hopes to be remembered for in the future. “I guess we all, in our lifetimes, want to make an impact and be remembered for something. I would hope that when people look at my work, no matter if it’s next week or twenty, thirty, or fifty years from now, that they can still see it and smile and say ‘that artist was a happy person.’”

If you’re interested in seeing more of Shipley’s artwork, you can visit her website by clicking here.

The Metaverse Looks To Be The Next Real Estate Market As Virtual Land Sells...