Blog - Latest News
You are here: Home1 / Around The Web2 / Travel3 / How the Strike in Paris Will Affect Your Holiday Travel 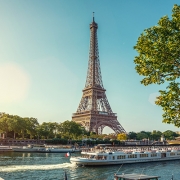 For those living in France, the country’s strike culture is undoubtedly already familiar. But for those planning to visit for the holidays, know that you may need to make adjustments to your itinerary. Beginning December 5, railway workers, teachers, air traffic controllers, and other protestors launched an unlimited nationwide strike against President Macron’s pension reform plan. Since then, the effects have been more than slightly troublesome.

From severely reduced public transportation to canceled domestic flights and even some temporary museum closures, the disruption has been most palpable in the greater Paris area. As of December 13, the RATP transport union intends to extend the strike at least through December 17, with threats of prolonging the disruption through the holiday. That means eight metro lines remain completely suspended, six lines are operating only during morning and afternoon rush hour (6:30 a.m. to 9:30 a.m. and 4:30 p.m. to 7:30 p.m. on weekdays, according to Le Parisien) and only 50 percent of buses are in service. The two fully automated metro lines, 1 and 14, are running as normal, however they’ve been overcrowded during peak hours. The most frequented metro and RER (suburban line) stations, such as Châtelet and Hôtel de Ville, have experienced human traffic jams (literally) in corridors and along metro platforms.

SNCF trains, including the high-speed TGV lines, and Eurostar service are also operating on a radically reduced schedule across the network. Travelers should be sure to monitor the status of their train journeys and reschedule if possible (postponing a Eurostar trip is currently free of charge).

On the roads, car traffic is equally as congested and cabs and ride-share services are in limited supply. Reserve a car well in advance for journeys to and from the city’s major airports (or expect long waits) and leave extra early to account for road delays.

What Are The 5 Interesting Facts About Blockchain Technology?