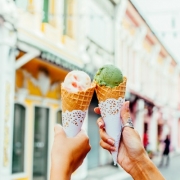 The last six months has seen the number of people working from home increase significantly due to the covid-19 pandemic that has seen much of the world close down at various stages during the period. However a recent report in sales figures has suggested that while many of us are happy to eat our way out of a pandemic, we may not be that bothered about what we look like.

Unilever has reported an increase in their ice cream sales in the lead up to June with sales jumping by more than a quarter over the course of three months.

However sales of both deodorant and shampoo continued to decline as the number of people leaving their homes also dropped.

The figures indicated to Unilever that there had been significant “growth in home consumption of foods, ice cream and tea” during the lockdown however there was also “fewer personal care occasions from going to work or socializing.”

There were some small glimmers of hygiene hope though as some personal hygiene products had seen a massive increase in sales, specifically hand sanitizer, as the desire to try and keep coronavirus at bay became the major priority for many of us.

The company’s report also highlighted that we are fussy about which brands we use with the country’s favourite ice creams appearing to be Ben and Jerry’s and Magnum.

The news that the personal care section of Unilever has shrunk was not a surprise in the business world as the company had already issued a warning in their April trading update where they announced that it seemed personal hygiene had shifted in people’s priorities as they worked from home. Many of us have put off washing our hair that little bit longer and fuller beards have become the normality on many faces although the biggest concern was the drop in deodorant sales.

And although lockdowns have been lifted in many parts of the world the drop in personal care sales has continued, suggesting some of us have developed a less hygienic lifestyle.

Surprisingly though, while we seem to have lost our interest in keeping ourselves clean we are spending more time keeping our environments clean. Sales for household cleaning products have also seen a huge surge in sales with both Domestos and Cif getting boosts thanks in part to their campaigns to encourage consumers to keep ‘high-touch’ surfaces clean in an attempt to reduce the spread of covid-19.

Unilever also saw a 4% increase in their pre-tax profits in the first part of 2020 as people panic-bought items such as toilet rolls, meaning the company’s profits increased to around $5.7bn.

Their report states that, “In North America and parts of Europe, there was a positive impact from household stocking in March.”

The report continues, “Consumption patterns then normalized in the second quarter with heightened levels of demand for hygiene and in-home food products.”

Unilever’s Chief Executive Office Alan Jope confirmed the results and claimed they “demonstrated the resilience of the business” following the company seeing a drop in product demand from the hospitality industry as many bars, cafes, hotels and restaurants were told to close down.

Yet with more people being forced to provide themselves with their own food, sales in items such as Hellmann’s sauces and Knorr soups saw an increase as well as many other brands in their retail foods business.

Looking to the future Unilever are in talks to ‘split off its tea business’. Currently they own brands such as Lipton, PG Tips and Brooke Bond and it is believed the company would continue with their tea investments within Indonesia and India while focusing on ready-to-drink tea brands.

The report continued, “The balance of Unilever’s tea brands and geographies and all tea estates have an exciting future, and this potential can best be achieved as a separate entity.”
“A process will now begin to implement the separation, which is expected to conclude by the end of 2021.”

Unilever have recently come under fire for some of their products, most notably their Fair & Lovely skin lightening cream, which has been receiving vast criticism for what many see as a negative approach to dark skin tones.

Following the company’s admittance that the brand implies a “singular ideal of beauty” any references to “lightening” or “whitening” will be removed from the product and the item will be renamed.

While the cream is popular across Asia more than 18,000 people signed two petitions demanding that Unilever stopped producing the product with one petition stating, “this product has built upon, perpetuated and benefited from internalized racism and promotes anti-blackness sentiments.”

Meanwhile the second petition stated that they thought the cream, “tells us there is something wrong with our color, that we have to be light in order to feel beautiful. In order to feel worthy.”