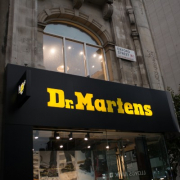 Whilst it is very common to want to go out and buy the latest fashions from the newest ‘It’ brand or have the most advanced gadgets, there are still many brands that have been around for tens, or even hundreds, of years that continue to stand the test of time. Brands such as Hermes that was founded in 1837 and Louis Vuitton in 1854, have cultivated a reputation for luxury goods, a fundamental part of their brand identity, that has helped them to maintain their popularity over the years. Other brands have created an iconic style that has established them as a go-to brand for that signature look. One such brand is Dr. Martens, whose classic boots are instantly recognizable across the world.

It was recently reported that this infamous footwear brand is planning to join the stock market, which would mean a proportion of the shares in the business would be available for investors to purchase. In this case, there will be no sale of new shares in the IPO and at least 25 per cent of the company will be floated. This “London float would be one of the first big initial public offerings of the year” according to the Financial Times. Sky News reported that Goldman Sachs and Morgan Stanley have been appointed to head up the flotation and the value being sought has not been disclosed.

The footwear brand continues to bring in around £672m of annual sales, including 11 million pairs of shoes that are purchased in over 60 countries, as reported by the BBC. The Coronavirus pandemic has certainly been tough on retail outlets in particular, with many finding their physical stores have had to close for considerable parts of 2020. In the UK, the reintroduction of lockdown restrictions was announced on Monday 4th January 2021 and this meant that again non-essential retail stores would need to close their doors.

“Dr Martens’ most recent figures show rising sales, despite Covid-related restrictions on its stores, as it shifts more sales direct to consumers.” said the BBC, adding “The company runs 130 stores around the world, but its push to online sales mean these now account for about a fifth of its revenues.” Even with the challenges of the pandemic, group revenues increased 18% on the previous year for the six month period up to September 2020.

Other brands that have reported increases in sales include Amazon, who reported a 37% increase in earnings at the end of October 2020, and ASOS, where group sales increased by 23% from the previous year in the final four months of 2020. ASOS are also planning to open a new UK warehouse that will create 2,000 jobs. Although this is not the same across the retail landscape as many other businesses continue to struggle.

Perhaps the most recognisable Dr Martens shoe is the smooth leather boot with eight lace holes, a design which has certainly stood the test of time. The eight lace boot is called the 1460, after the date 1st April 1960 which was when the first Dr. Martens boot in the UK was sold. Tell tale signs of Dr Marten books include the air-cushioned sole and “air wair” tag on the back of the shoe. Not only available in black, you can now purchase many of their shoes in brighter hues, such as yellow, orange and peppermint green. In addition to these lace up boots, customers can also buy chelsea boots, ankle boots, loafers and sandals. A number of styles are also now available vegan, or not made from animal leather. Styles are available for women, men and children and you can also purchase a range of accessories.

The history of the Dr. Martens brand is iconic. One of the most important aspects of the shoe is the air-cushioned sole, and this was the design of Dr Maertens and Dr Funk from Munich to help the recovery of Dr Maerten’s broken foot. They then sold the patent rights in the UK to the R Griggs Group, who had a reputation in Northamptonshire for making quality work boots since the turn of the 20th Century.

Initially the signature footwear were marketed as work boots, but in the 1960s they were adopted by the skinhead youth movement. This heightened their popularity among young people. Other movements throughout history have also adopted the boots within their signature style, including 1970s punks and 1990s britpop fans. Although there was a time close to the millennium where the company found itself in financial difficulty. In 2013, for £300 million, the brand was taken over by Permira, a private equity group, who currently own about 75 per cent of the iconic bootmaker, prior to the flotation.

As commented on InStyle as part of the 2020 New York Fashion Week, it is now quite common to see Dr Martens boots on the runway. In addition, Style Report Magazine called them “2020’s hottest boot trend”, which cements their position as a signature shoe brand.

Looking to the future, the Chief Executive of Dr Martens Kenny Wilson highlighted that there have been many achievements over the past seven years and the large investments that have been put into the company to create “long term, sustainable growth”.

It will certainly be interesting to see when Dr Martens’ flotation takes place and how this will be received.