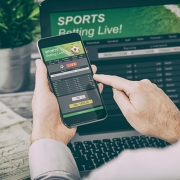 The launch of mobile sports betting in Indiana coincides with a huge boost in total handle in October, new data shows.

The state accepted nearly $91.7 million in mobile and retail wagers in October, according to numbers from the commission. More than half of that money was wagered via one of the three mobile sportsbooks that have launched in the state.

People in Indiana bet more than $41 million on football in October, far more than any other individual sport, data shows. Parlay bets, which are bets on multiple sports or events, commanded more than $20 million in wagers.

Baseball, during a month where the Washington Nationals won a thrilling, seven-game World Series against the Houston Astros, commanded nearly $10.5 million in bets. People in the state bet just $6.2 million on basketball in October, but the NBA regular season did not kick off until the end of the month, so that number will likely increase in the following months.

Mobile and retail bets in October yielded more than $11.5 million in adjusted gross revenue for the sportsbooks, according to the commission’s data. October also saw the state bring in nearly $1.1 million in tax revenue.