Inside A Neurologist Professor’s Progressive Research On Traumatic Brain Injuries In Veterans |...

You are here: Home1 / Features2 / Health Feature3 / Inside A Neurologist Professor’s Progressive Research On Traumatic Brain I...

For many veterans, the fight doesn’t end when they step off the battle. Traumatic brain injuries (TBI) can cause significant cognitive, behavioral, and physical damage. However, thanks to research from experts like Dr. James Russell Couch, Jr., more analysis is being found on these afflictions while providing a pathway for better treatment and awareness. 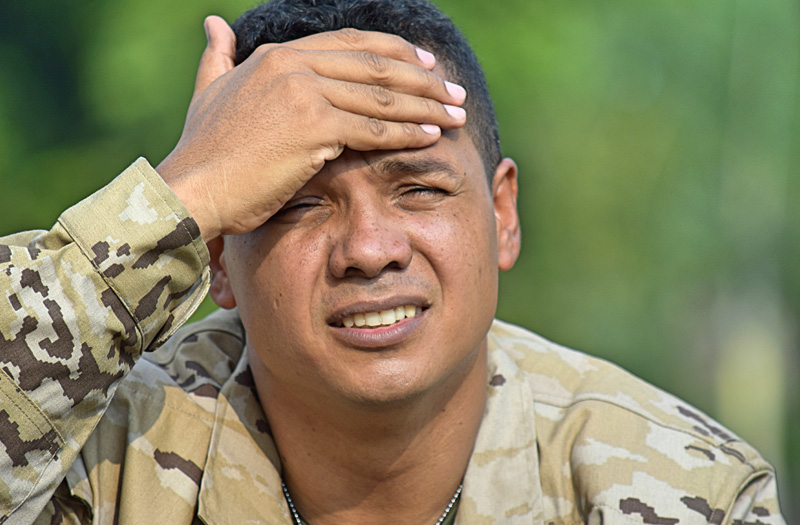 Traumatic brain injury (TBI) is a major problem for the military. In the recent Iraq and Afghanistan wars, 15-20% of soldiers deployed suffered a TBI (DTBI). Headache is the most common symptom following a TBI in civilian and military populations followed by dizziness, coordination, and cognition problems. While these symptoms may be transitory, they may be prolonged in many.

Post-traumatic stress disorder, or PTSD, and severe depression were also noted frequently in veterans with a DTBI. This problem, previously noted as “shell shock” or “battle fatigue,” has received much attention in veterans of recent wars and is a major psychiatric issue for these individuals.

Research on TBI has progressed exponentially thanks to researchers like Dr. James Russell Couch, Jr., a professor and former chair of Neurology at the University of Oklahoma Health Sciences Center. In studies on a group of 500 veterans with DTBI, he found that at one to 14 years after DTBI, 48% had headaches more than 50% of the time, and almost half of these had PTSD and severe depression.

TBI, which occurred in 414,000 cases among service members between 2000 to 2019, first caught the attention of Dr. Couch when he treated a large number of post-traumatic headache patients at Southern Illinois University in the 1980s. “I continued with that interest when I came to the University of Oklahoma, and eventually developed two outpatient databases from which I published multiple abstracts.”

“[The] first major paper dealt with my experience while at Southern Illinois University where I saw patients in a headache clinic — and also on the rehabilitation service — and noted that chronic daily headache was more common in patients that had had mild TBIs, as opposed to those that had more severe TBIs,” Dr. Couch said. Since he worked in the headache clinic and the rehabilitation service, this allowed him to follow up with patients encompassing a spectrum of the TBI problem.

Comparing subjects who were ten or fewer years with those eleven or more years after their DTBI showed no differences in occurrences of headache, PTSD, or severe depression.

During that time at Southern Illinois, Dr. Couch was a professor and chief of Neurology. When he arrived at Southern Illinois Medical School, there was no Neurology service. However, by the time he left, it had become the largest section in the Medicine Department in terms of patient care and faculty. Moving to Oklahoma University Medical School in 1992, as Chairman of Neurology, Dr. Couch continued his interest in headaches. In 2006, after stepping down from Chairmanship, he began to look at the problem of headaches after DTBI in Afghanistan and Iraq War Veterans.

The first study involved reviewing medical records from a TBI clinic established to evaluate and assist Afghanistan and Iraq veterans who suffered a DTBI. From June 2008 to April 2011, 948 total subjects had been evaluated at the TBI clinic, of which 749 had a deployment-related TBI (DTBI). The study used the first 500 subjects seen in this clinic and focused on symptoms of headache, dizziness, balance, coordination problems, and cognition. For this group, the DTBI had occurred one to eight years earlier and current, persistent post-TBI symptoms within the last month were queried. This study found that 95% of 500 veterans had headaches, and half of them reported a major headache problem with frequent and severe headaches. One-third of these also noted significant cognitive problems.

A second study employed telephone interviews of DTBI veterans, and a third study involved face-to-face encounters with the veteran subjects. These additional studies added questionnaires on PTSD and depression as these conditions were noted to be prominent in other reports on Afghanistan and Iraq veterans. However, little had been done on their relation to post-traumatic headache from a DTBI. These two studies, constituting 160 veterans with a DTBI, found that 63% had PTSD and 45% had severe depression. Chronic daily headaches (headaches occurring ≥ 15 days/month) occurred in 46% of cases.

The second and third studies included control subjects who were Veterans without DTBI, and who were matched for age, sex, race, and time of deployment to the Veterans with a DTBI. Additional factors queried included questionnaires dealing with PTSD and depression as well as marital and employment status.

Of 130 matched controls, 7% had chronic headaches, 21% had PTSD, and 11% had severe depression. The differences between the DTBI and Control subjects were very striking. 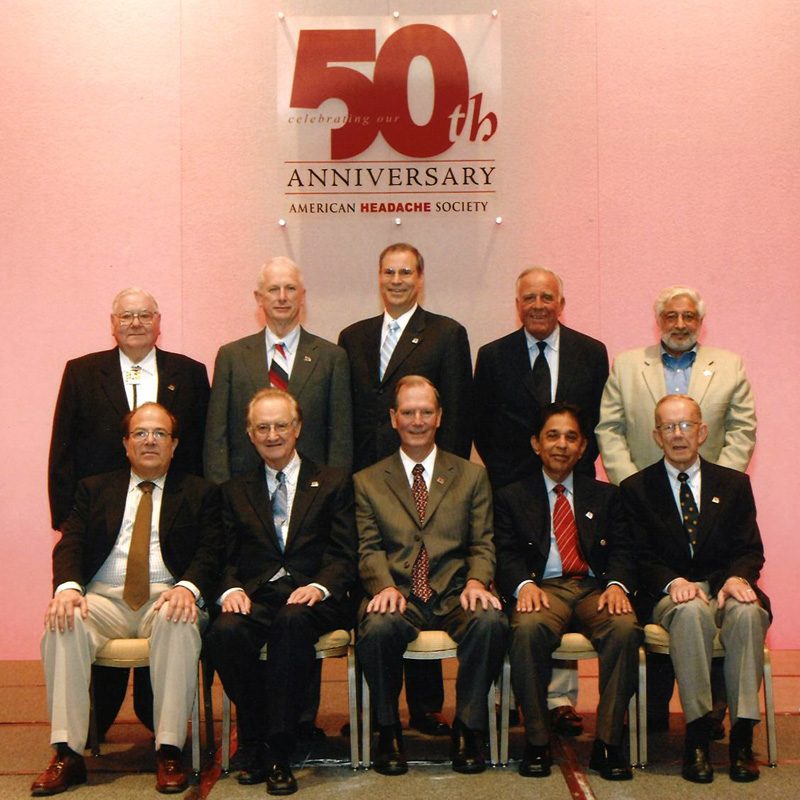 “Overall, these guys are not getting any better. In fact, the headaches show a non-significant trend towards getting worse.” 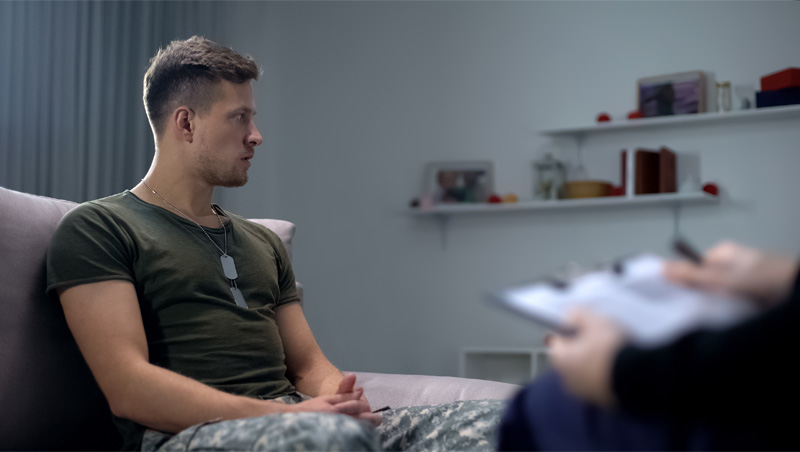 The third study, which was funded by the Department of Defense, added a basic science component. Dr. Couch, working with Dr. Jay Hanas, Ph.D., examined blood samples of the subjects with mass spectrometry to look for molecular biomarkers that might relate to chronic headache, PTSD, and depression. A number of potential biomarker molecules were identified, however, the project was terminated by the unexpected demise of Dr. Hanas.

Dr. Couch’s current project is centered around PTSD and depression in relation to the headache problem, which he said involves examining chronic migraine headaches that began with DTBIs — as opposed to other types of headaches — and then comparing the headaches and their course over time in the DTBI veterans to those in the controls.

The results identified that chronic migraines, which only affect 3 to 5% of the U.S. civilian population, are seen in almost half of veterans with DTBI. “What we’re finding is that for the people that have had a DTBI, roughly about 40-50% have headaches more than 15 days a month, and the majority of those fit the definition of chronic migraine.”

Dr. Couch noted that of subjects with a DTBI, about 60% have PTSD and 40% have severe depression, while the majority of these have both conditions. When compared to the 140 control Veterans, only about 7% of these have chronic migraines. With regard to the longer-term course for the DTBI group, Dr. Couch expressed concern that these results suggest a less-than-desirable direction.

Dr. Couch explained that while there were indications throughout the history of warfare that a number of soldiers who went to battle never came out mentally intact. Not much was known about TBI and PTSD injuries in early twentieth-century conflicts. One of the more interesting events, he said, was shell shock, which occurred during carpet shelling in World War I.

“English physicians at the time were noticing that when these [soldiers] came back, they had an undiagnosed neurological problem accompanied by mental and personality change.” The psychiatrists felt it was a psychiatric disease, while neurologists contested it as a neurological condition.

“The psychiatrists won and it was treated as such,” Dr. Couch said. The forerunners of PTSD,  shell shock, in WWI and battle fatigue in WWII wouldn’t be fully understood — and termed — by the medical world until the 1980s and beyond. “By that time, PTSD was recognized and defined. It was recognized in Gulf War Veterans, however, the Gulf War was so brief that it really was just a little blip. Further inquiry found there were studies going back to Vietnam veterans who were diagnosed with ‘battle fatigue,’ and it became clear that this diagnosis probably represented PTSD.”

Dr. Couch credits his success to his father, who demonstrated high levels of work ethic throughout his life. “My father was literally the American Dream personified,” he said. His father went through the eighth grade in a small country school and then went to high school in the county seat living in a rooming house four days a week, then while working on his father’s dirt farm in North Texas the other three days of the week. He then completed college at Texas A&M and was in the Army during WWII. After the war, he completed a Ph.D. in biochemistry and joined the faculty at Texas A&M.

“He worked very hard. He eventually developed a program in Animal Nutrition. He was one of the small number of people that had a Ph.D. in biochemistry in that area. That was my model. Dad taught you how to work hard, so to be successful, you go in there and you work hard.”

Another family member Dr. Couch celebrated was his wife for her support continuing over his career. He noted that it was hard on both of them at the time of his internship, and residency in Neurology, when he was away from home frequently. Later, the demands of teaching, research, patient care, and administration often were difficult to reconcile with family life with his wife and two children. “My wife made the whole thing work,” Dr. Couch noted. “One of the most important things anybody’s ever going to do is create a family. You love that family and give them everything you can.”

It’s clear Dr. Couch has taken after his father in terms of bursting along with an assiduous, “can do” attitude. The professor, referencing a television interview between writer and producer Alistair Cooke and an immigrant, emphasized a phrase he lives by: “Ain’t no free lunch.”

“If you sit back, nobody’s going to hand it to you. You’re going to have to go and work for it yourself,” Dr. Couch advised, noting his own work ethic was, in part, built by working on the University of  Texas A&M’s experimental chicken and turkey farm during his high school and college years.

To learn more about Dr. Couch’s study on prevailing headaches in deployment-related TBI patients, you can click here. 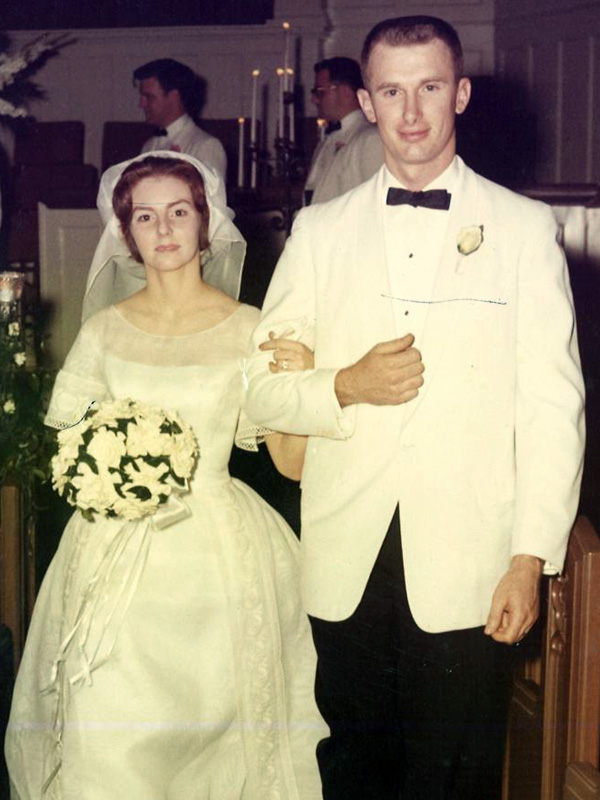 How The “Stray” Video Game Is Bringing Benefits To Real Life Fe...