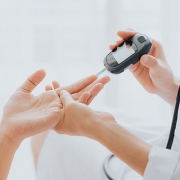 For some people, the idea of buying and selling prescription drugs and medical supplies on the illicit market might conjure visions of Breaking Bad, but for many Americans managing chronic illnesses, underground medication trading is a vital part of staying healthy. New research published in the Journal of Diabetes Science and Technology found that people with diabetes who participate in donating, trading, selling, or buying medication outside of the healthcare system do so because mainstream healthcare is a colossal, life-threatening failure.

The majority of the participants said the major motivation for their move to the illicit market was “financial necessity,” along with accessibility issues—most of the people surveyed actually had health insurance at the time of their underground market interactions. Those who donated medical supplies to other people (including loved ones and strangers in need), said they felt especially compelled to do so because they felt bad about keeping their excess supply when they knew other people were going without.

The study listed a number of risks involved in engaging in illicit market medical trade, including patients receiving faulty equipment or tainted, expired, or incorrect medications. But the study’s authors were careful to highlight the fact that the demand for an underground market did not materialize out of thin air. Instead, the researchers tied its existence directly to the inadequate care available to the average American.