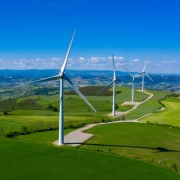 When the COVID-19 pandemic spread throughout the world, many governments had to reduce or pause a large portion of their working economies. Lockdown procedures led to some positive news on the climate change front, as many people were unable to commute to work, carbon emissions dropped to a record-low output level. The International Energy Agency expected an 8% overall global drop of CO2 emissions. Yet, the climate crisis is still upon us and as governments across the globe look to gear up their economies, climate experts and activists are urging the adoption of green policies into the reboot.

Various platforms and organisations have predicted the short amount of time we have left to prevent the disastrous effects of climate change from becoming irreversible. In light of the COVID-19 pandemic, The International Energy Agency have produced a sustainable recovery plan for governments to make a significant impact on preventing a climate crisis. According to CNN, such a strategy could avert a repeat of the 2008 global financial crisis aftermath, when governments did not prioritise climate, and CO2 emissions saw the largest increase ever.

In a press release, Dr Faith Birol, the IEA Executive Director stated:
‘Governments have a once-in-a-lifetime opportunity to reboot their economies and bring a wave of new employment opportunities while accelerating the shift to a more resilient and cleaner energy future, Policy makers are having to make hugely consequential decisions in a very short space of time as they draw up stimulus packages. Our Sustainable Recovery Plan provides them with rigorous analysis and clear advice on how to tackle today’s major economic, energy and climate challenges at the same time. The plan is not intended to tell governments what they must do. It seeks to show them what they can do.’

The coronavirus crisis has severely impacted many areas of society, one or which is of course, the global economy. The IEA calculated that globally, governments would be spending approximately $9 trillion to reboot the economies which are set to shrink by approximately 6% in 2020. Industries have been paused, many people have lost their jobs and some businesses have been forced to close permanently. The plan sets out a sustainable recovery that will not only look to combat climate change, but will also create jobs and encourage economic growth.

According to the IEA, ‘This detailed plan is focused on cost-effective measures that could be implemented during the specific timeframe of 2021 to 2023. It spans six key sectors – electricity, transport, industry, buildings, fuels and emerging low-carbon technologies. The plan takes into account national and international objectives for long-term growth, future-proofed jobs and sustainable development goals.’

The plan predominantly looks at a move to more sustainable energy supplies. Suggesting that governments globally invest approximately ‘1 trillion USD annually’ over the next three years, into energy projects. Stating that the plan would spur economic growth by 1.1 percent each year, create roughly 9 million jobs, and cut emissions.

Implementing the strategy ‘would cut 4.5 billion tonnes out of global greenhouse gas emissions by 2023 and put the world on a path to achieving the goals of the 2015 Paris Climate Agreement’ CNN reported.

The IEA’s plan analyses and identifies key areas of energy-related recovery and details the measures that could be adopted in light of the COVID-19 impact and considering cost effectiveness, CO2 emission reductions and job creation. The suggestions include:

During the pandemic, energy markets saw an ‘unparalleled’ 20% shrink. The industry which once employed 40 million people globally, is estimated to have seen 3 million job losses, according to the report. Yet, new jobs would be created in areas such as retrofitting buildings for energy efficiency and so on with this new plan. Alongside, making the energy sector more resilient and able to cope with future crises such as this.

The summary of the report on the IEA website concluded: ‘The IEA is providing decision-makers in government, industry and the investment community with the strongest possible data, analysis and policy options to help them choose the best path forwards. We are bringing all of these groups together to identify how to act on the findings of this report at the IEA Clean Energy Transitions Summit on 9 July 2020.’

Coping With Anxiety When Leaving The Home