Blog - Latest News
You are here: Home1 / News2 / Lifestyle News3 / Is My Teen Ok Today? The Importance of Well Being in Young People During... 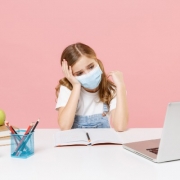 This is a question on many parents’ lips at the best of times. Checking up on your teenagers state of mind, their thoughts, their feelings and their emotional well being, were not easy even before the world threw us a curveball. With alarming reports showing the number of young people facing mental health challenges as a result of coronavirus as stated in The Guardian, keeping your teenagers mentally healthy during these uncertain times is as important as ever. Let’s explore some ways to help them through this challenging time.

Let things go – When I was a teenager, if someone had said ‘Hey do you want to spend a few weeks in bed watching T.V?’, I would have jumped at the chance. Let us not forget that it is during our teenage years that we need more sleep. Feeling rested is key to sustaining energy for the rest of the day. Make peace with the fact that it is o.k if they are sleeping in until noon. There is still plenty of time to be productive in the rest of the days, weeks and months to come.

Air the teen – just like you would the dog. Exercise and mental health are linked closely together for a reason. I don’t ask for much from my teens at the moment but one thing I do ask is that they get out at least once a day. For a walk, a bike ride or even a run! (I think this has happened once). There may be days where getting them to sit in the garden is the best you manage to do, but that’s OK too. Every little helps!

Keep communicating – Getting little more than a grunt from your teenager can be a struggle but there are also those precious moments where they’ll talk to you like you’re a normal human being, even a friend. Those are the key moments to listen, go back to and offer advice. Be careful though, sometimes it’s a trap! There are times when you just need to let them talk and don’t offer advice.

Teenagers are very good at letting you know if they don’t want to hear it! It sounds harsh but be grateful that they’ve let you into this small snippet of their lives. A teenager’s brain works differently to an adults and they are acting on the impulse areas rather than their decision-making parts of their brain. You’ll have different ways of looking at and dealing with a situation and sometimes you need to let them figure it out for themselves. Listening to other teenagers and their experiences can also help your child realize that they are not alone.

Try random new things – In the first few weeks of lock-down, my son learnt to render the side of our house with his Dad. I can’t say every day was a joy, it wasn’t. He moaned about his arms aching, how his friends weren’t doing this and how he was hungry (always hungry). Yet, with that said, in every phone or video call with friends or family since then, he has told them what he has done. There is still that sense of achievement that has stayed with him.

Think back to when they were younger – From cooking, to playing, artwork and being creative, there are many things your child might have enjoyed when they were younger but have lost touch with. There are countless advertisements currently on line aimed at keeping us busy during lock-down. I kept being drawn to some adult versions of colour by numbers. When my daughter was little she was obsessed by these. I mentioned to her one day how I’d really like some artwork for the house and would she like to have a go at it. She nearly bit my hand off, she was so excited. I can hand of my heart tell you that I would have been laughed at if I had suggested this before lock-down. Don’t be surprised by their change in reaction to things.

Finally remember that all teens are different, what works for one might not work for the other. You might find that your 13 year old son started off in heaven whilst your 16 year old daughter is in hell. Those tables can quickly turn and as the novelty for him wears off, he is learning the value of his friendships and education and there is no other time in his life that he would have learnt this in that way. The 16 year old who was going through hell, unable to see her beloved boyfriend and feeling like her GCSE’s had been whipped from under her, has now got herself into a routine and is learning the value of perseverance and patience.

Know that you are not alone, useful organizations such as Barnardo’s can offer great support and advice. I think taking the pressure off everything right now is key. If your child completes an hour of school work a day then great but watching them smile as they win a family board game or seeing them independently sort out the BBQ, make the tea or tidy their bedroom, helps us know that they are OK. It reminds us that they are moving forward and taking each day as it comes, at their own pace. Right now, being OK is all we need to see.