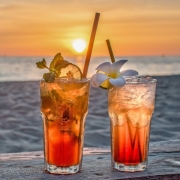 Global rum sales have reportedly flat-lined in recent years, but those inside the industry are seeing growth in higher end variations of the traditional drink. And like gin, which experienced a huge boom in sales in recent years, could rum follow suit and become the next big drink?

As someone fast approaching, cough cough, 40, I’ve seen my fair share of drink fads come and go. From the early introduction of the first alcopop ‘Hooch’, followed by the likes of Martini Metz, Bacardi Breezer and Reef, there was a time when these drinks dominated the market as seasoned drinkers welcomed something new and a little bit different. So it’s been interesting to see how my own drinking tastes have evolved over the years, and how I’ve grown to adopt gin as my drink of choice in almost all social situations that call for a glass of something stronger than a coke on ice.

I think I have perhaps followed the herd in that flavored gins are my go to drinks, and I love pink gin. I’ve even started to see some of my ‘traditionally’ male friends switch their beloved beers or vodka mixers for a tipple of the old gin too, such is its widespread appeal. According to Beverage Daily, the UK experienced record sales of gin in 2019 and continues to dominate the market in 2020. Unsurprisingly, it has also been one of the best selling spirits during lockdown too.

But all good things must come to an end and eventually, even the most dedicated of gin fans may start to seek out a new challenge for their taste buds. This was indeed the case for both whiskey and vodka, which both fell out of favor as interest waned and drinkers started to look further afield. With many suggesting that gin could also follow this pattern, some experts believe rum could be perfectly primed to take the lead in the coming years.

For those who are not too familiar with this particular tipple, rum is a liquor made by fermenting and then distilling sugarcane molasses or sugarcane juice. It is then aged, usually in oak barrels, for anything from three to ten years. Rum can be enjoyed straight, with a mixer or in a cocktail, and there are typically several overarching varieties, those being white, dark or spiced rum. There can also be a significant difference in the strength of the rum depending on its variant, ranging from around 20% up to around 75% ABV.

Despite the clear potential for rum to take on the market leading favorite, gin, it has so far failed to capture interest in quite the same way. Some industry experts believe that this is because the focus has been on lower cost producers, and with this comes a lower quality product. Many drinkers may have only tasted cheaper varieties of rum, and so have not had the opportunity to sample what this particular liquor really has to offer.

Those inside the industry would argue that there has been strong and promising growth in the rum sector, but that this is taking place at the higher end of the market, where prices are higher and volumes are lower. The net effect of this is that the growth tends to be absorbed into the overall figures, and effectively becomes hidden from sight. Dawn Davies from The Whiskey Exchange (TWE) said, “value is growing faster than volume, which I find really encouraging.“This suggests that there is a premiumisation, which leads to long-term growth.”

It would also appear that interesting flavors and taste combinations are capturing the interest of the market, with UK supermarket Sainsbury’s reporting that pink gin and spiced rum were the two big winners in the spirits category during lockdown. Some gin purists would argue that spiced rum isn’t quite the same as traditional rum, perhaps in the same way that others view pink gin and a devious variant to the original tipple. But regardless of what those on the inside think, what ultimately matters is supply and demand; the more variants that on-trade and off-trade outlets stock, the more options consumers have and the more experimental they will be. But these outlets are not going to stock items without confidence that they will sell, so it’s very much a chicken and egg situation.

In an attempt to try and challenge some of the stereotypes associated with rum and to drive demand from the bottom up, the industry is getting behind a widespread rebrand, helping to shed some of the illusions which cloud the drink and could prevent new markets from exploring it. One major assumption is that rum is a ‘summer’ drink, something which you’d typically consume on holiday, perhaps given its associations with the Caribbean. Some of the traditional mixes for rum include coke or pineapple juice, and adverts for well known brands such as Malibu helped to cement this holiday-like persona. That said, there are many traditional winter drinks which include rum, such as winter punches and the traditional hot rum toddy. By educating consumers on how to best consume rum throughout the year, it is hoped that they will start to experiment and explore the potential of a drink that has been hidden away for so many years.