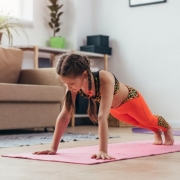 Joe Wicks, the new household name, the fitness coach that has been offering free workouts every weekday during the coronavirus lockdown. After nearly four months, the workouts have planned to end on Wednesday 22nd July. In the eighteen weeks, he has broken one hand and brought an unlimited amount of enthusiasm to the fitness show, in an attempt to keep children who are out of school and adults that want to join in some fun, to keep exercising. The fitness live stream has kept millions of people occupied all over the world. When Joe Wicks started the PE with Joe series, the audience was mainly based in the UK however as weeks went on his influence grew global.

The morning series, PE with Joe, managed to raise thousands of pounds for the NHS and establish his name to become one of the most successful during lockdown. He began to livestream the sessions on the 23rd March after it was announced that schools in the UK would close. Joe had planned to do a tour of schools this year.

The second video Joe released was watched by nearly one million people, breaking a world record for the number of people to live steam a fitness video on YouTube.

Joe Wicks saw this opportunity to offer thirty minutes of fitness that could be done in the comfort of your own home, making it a part of the morning routine for many families and pushed it forward. As the Guardian reports Wicks shared in his final episode “It’s a sad day but I’m so proud,” he added “We’re fitter and stronger. We’re healthier and happier”.

As the Guardian reports, in his last episode he goes on to say “That’s the end of PE With Joe. Thank you so much for taking part. Thank you to everyone from the teaching assistants, parents, the fans, everyone that’s taken part. I’ve loved it so much and I’m going to miss you all.”

Not only did his own family see the benefits, but he has made a real difference to other families too. As BBC News reports Vanessa Taylor from Greater Manchester admitted she did basically no exercise prior to lockdown “He’s changed so many lives for the better” she adds “It’s absolutely brilliant. From day one, I have just kept going.”. Not only have people like Vanessa seen the physical health benefits but there are mental health benefits too. Joe Wicks series has allowed people to have a motivation to still have a normal day routine, despite some people not being able to work. Some fans have expressed that the exercise routine has helped them manage their anxiety during lockdown.

Wicks has also built a following of many loyal fans which has resulted in him receiving thousands of letters from children and others that feel the work he is doing is outstanding. It has been highlighted many times that Joe should be made BBC’s next Sports Personality of the Year. To add to this, many feel Joe has earned his place in Madame Tussauds. It has been rumoured the fitness coach is at the top of the list of new figures that could be added when a review of the display is put in place.

But before lockdown, Joe had built an established name for himself through Instagram where he has built a successful social media business selling his exercise routines, recipe books and guides to weaning babies. He has made a charitable donation to the NHS of £580,000 with the finance he has made throughout lockdown. There is speculation he could be in line for an honour from the government.

Joe has been named the UK’s favorite PE teacher offering short bursts of high intensity workouts, a type of cardio children might have not interacted with at school. Some academics are concerned about the changed perception of PE though due to the series. For example, the University of Loughborough has praised the fitness coach, Dr Julie Stirrup has commented “Whilst Joe Wicks was brilliant in getting young people into physical activity at the time of lockdown, that can be a great thing and great in terms of mental health. But we don’t think it’s PE,” she continues “We don’t want people to see PE as just watching Joe Wicks, PE is much more.”

Even though there are some critics to the series, many are completely grateful for the exercise Joe Wicks has provided for free. He has helped many people cope with the lockdown blues. As Kerry tells BBC News “I just think if he’s reading the article, it’s just a big thank you to what he’s done,” says Kerry. “He’s done it for months and months and he didn’t have to. He’s helped people cope with the lockdown”.

Going Out Again: How Does It Feel and Are We Really Able To Social Distance...