Blog - Latest News
You are here: Home1 / Around The Web2 / Culture3 / King Tutankhamun: How a Tomb Cast a Spell on the World 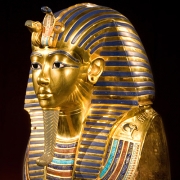 As the pharaoh’s treasures travel to London, Patricia Clavin looks at how the discovery of his tomb resonated with the bloodshed – and consumerism – of the early 20th Century.

When King Tutankhamun’s tomb was opened in November 1922, the world fell under his spell. For today’s archaeologists, the explanation for the cult of King Tut lies in the exceptional richness of the discovery, especially as many of the tombs were robbed of their mortuary goods; and in the mystique surrounding the premature deaths of the boy king and Lord Carnarvon, who funded the dig. As the largest collection of Tutankhamun’s treasures to travel outside of Egypt goes on display at the Saatchi Gallery in London (after drawing record-breaking numbers in LA and Paris), the find clearly still has a global appeal in the 21st Century.

But as I explore in a new Radio 4 programme, The Cult of King Tut, the power of King Tutankhamun lay as much in the extraordinary context of the 1920s as it did in the contents of the tomb. In 1922, Howard Carter, the British archaeologist who found the tomb, was caught in the middle of a political storm. Egypt had recently undergone a political transformation, and the new government kept a tight control on the artefacts.

To raise money to pay for the complex process of excavation, preservation and cataloguing the tomb’s riches, Lord Carnarvon signed an exclusive deal with The Times newspaper giving it sole rights to supply the world’s press with news and photographs. At the time, this sort of arrangement was extremely unusual. Cat Warsi, assistant archivist at the Griffith Institute in Oxford, argues the financial support and continued media interest was vital “because this was a costly excavation that in the end took almost 10 years”.

This Anti-theft Backpack Has Already Raised Over $700,000 on Kickstarter