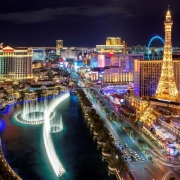 After more than 70 days of closed restaurants and casinos, no tourists and a deserted Las Vegas Boulevard, the start of June saw Sin City finally reopen for business. With an ease in lockdown measures creating a spike in Covid-19 cases in approximately half the states across the country, it was thought that Las Vegas’ ‘reopening weekend’ would fail to attract tourists in their masses, but instead most destinations were almost as packed as ever.

Just like the rest of the country, Las Vegas had been practically shut down to visitors and tourists in mid-March, creating a storm of financial worry for business owners and locals alike. While the city is still far from being completely back to normal, June 4 saw a number of hotels and casinos reopen their doors for the first time in over two months.

“We’re welcoming visitors back, but we’re going to take every precaution possible,” Nevada Governor Steve Sisolak said in an online briefing at the start of the month. “We’re encouraging visitors to come and enjoy themselves and have a good time.”

An advert produced by the Las Vegas Convention & Visitors Authority (LVCVA) highlighted the fact to potential visitors that, because of recent events, the city will most likely look and feel different for the foreseeable future, but that the same fun and entertainment will still be able to be enjoyed.

“People think of Las Vegas as an escape, and it can still be an escape from what everyone has had to go through over the last two-and-a-half or three months,” said LVCVA’s CEO Steve Hill. “Certain aspects of [Las Vegas] won’t necessarily be what you’re used to, but you’ll absolutely be able to come and have a great time.”

Among the first casinos to open were New York-New York Hotel & Casino, The Cosmopolitan of Las Vegas, Bellagio, Caesars Palace, the Flamingo Las Vegas, the Venetian and Wynn Las Vegas, all situated on the infamous Las Vegas Strip.

Popular businessman Derek Stevens, who owns both the D Las Vegas and the Golden Gate Casino in downtown Las Vegas, offered 1,000 free airplane tickets to Las Vegas in a bid to get visitors to return to the city and his establishments.

The tickets were claimed on Steven’s D Las Vegas website in less than two hours, and when Stevens decided to offer up an additional 1,000 free one-way tickets, they were gone within an even shorter period of time.

“We knew there was a high demand for Las Vegas, and to see these flights book as quickly as they did is overwhelming and exciting,” Derek Stevens said in a press release. “Whether people decide to visit my casinos or explore other parts of the city, this is a strong indicator of how Las Vegas can quickly be restored to its former glory.”

All resorts and hotels were required to provide ample hand sanitizing stations throughout their facilities and some, such as the Bellagio and New York-New York, provided full hand washing stations with soap, water and towels. At first, only employees were required to wear masks with signage suggesting customers do the same. Now, however, with an unexpected number of tourists flocking to the city and rising fears of a second spike, measures have been announced by the state of Nevada that all present at a casino table must be wearing a mask.

According to field reports from all areas of Las Vegas, tourists and locals alike are failing to heed warnings to wear a mask or socially distance themselves as much as possible. With a higher-than-expected level of tourism returning immediately to the streets and casinos of Sin City, more and more establishments are making the decision to reopen which further increases fears over the spread of Covid-19.

“Vegas is all about our guests being carefree, but in the initial days of reopening, it feels like there may be too much ‘free’ and too little ‘care,'” said Scott Roeben, owner of travel blog VitalVegas.com. “People aren’t being reckless; they just aren’t as paranoid as I’d expected.”

Coronavirus cases in Clark County, in which Las Vegas is located, have risen since the start of the month and last Tuesday saw a record for the daily number of new cases. The surge in cases resulted in gaming regulators and state officials introducing new measures that casinos must follow, including having all table players wear masks and offering protection to every customer.

However, some health officials have criticized the additional measures as not strong enough, with regulators choosing not to enforce masks on all casino members, or even for slots players. Pictures and videos on social media have demonstrated that there is a strong lack of interest from gamblers and visitors to wear masks and follow social distancing guidelines.

Kyrie Irving Among Players Refusing To Play 2020 NBA Season Amid Covid-19 And...

Theodore Roosevelt Statue To Be Removed From The Museum Of Natural History Steps...
Scroll to top