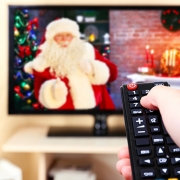 Emilia Clarke (Game of Thrones) stars as Kate, an aspiring singer and Michael fan who emigrated from then-Yugoslavia to a rough part of London as a child, and yet sounds suspiciously like the product of a boarding school in the home counties. She also looks like an expensively made-up Hollywood starlet, but she is apparently a wreck who lives for boozy one-night stands, and who crashes on friends’ sofas until they kick her out for breaking their possessions and killing their pets. She’s the kind of liability who could be sympathetic: see Fleabag and Brittany Runs a Marathon for details. And Clarke does her considerable best, pratfalling enthusiastically, belting out the over-written banter, and unleashing a hearty, wide-mouthed cackle whenever she can. But Kate is, frankly, a nightmare – not just selfish and destructive but relentlessly smug and sarcastic. Feig and Thompson share Richard Curtis’s belief that if well-spoken Englishmen and women use swear words and are unpleasant to each other (see Thompson’s character “consoling” Liam Neeson’s widower in Love Actually), then they are intrinsically hilarious. They aren’t.

Last Christmas excuses Kate’s obnoxiousness because she has only just recovered from a chronic illness. (In order to preserve the Big Final Twist, people keep mentioning this illness without specifying what it is.) When she isn’t being cruel to her friends, she is being cruel to Santa (Michelle Yeoh), the owner of the Christmas decorations shop in Covent Garden where she works. The viewer is invited to smirk at how tasteless the merchandise is. But we are also invited to coo at the sight of the zillions of fairy lights all over London, so you could say that Feig is having his Christmas cake and eating it. This double standard runs through the film. On one level it is caring and liberal, with laments about the plight of rough-sleepers and the xenophobia suffered by Kate’s mother (Thompson). But it is also stuffed with jolly jokes about Amy Winehouse’s death, and about foreigners’ imperfect English and about homeless people’s greed. There aren’t many comedies which are so nauseatingly sweet and sour simultaneously, but watching this one is the equivalent of scoffing an entire yule log in one sitting with vinegar instead of brandy cream.

Much of the sweetness comes courtesy of Tom (Henry Golding), a handsome stranger Kate spots through the shop window. After the obligatory meet cute – Kate gets a bird dropping in her eye – she and Tom start strolling through London together. Or rather, Kate does the strolling, while Tom skips and pirouettes around as if he’s auditioning for Peter Pan, a painfully whimsical affectation which the filmmakers give him as a substitute for any friends, relatives, pastimes or ambitions of his own. It’s glaringly obvious that this Manic Pixie Dream Boy will have something to do with the aforementioned Big Final Twist. But while you’re waiting for all to be revealed, he is almost as irritating as Kate is, and even less believable.

The script might as well have been generated by an AI which had grasped the concept of redemptive Christmas comedies, but had no understanding of human behaviour

I suppose that the film is meant to be an update of A Christmas Carol, and that our sweary Scrooge is rediscovering her better nature. But as Kate plods around from place to place, bumping into Tom, going to the shop to sneer at the customers, and then going home to sneer at her family, it is hard to care what it’s meant to be. The script might as well have been generated by an AI which had grasped the overall concept of redemptive Christmas comedies, but which had no understanding of human behaviour. Still, none of this means that the film won’t be a hit. Its visuals are so twinkly and its sentiments are so mushy that some people will see it as a holiday treat. But it’s appropriate that Kate spends half the film wearing elf boots which curl up at the end, because Last Christmas really is toe-curling stuff.