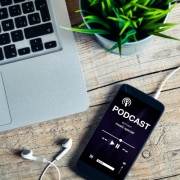 Former First Lady, bestselling author and film producer Michelle Obama has had many positive impacts upon the world, using her position to influence positive change in a number of areas and subsequently inspiring thousands across the world. Her hugely successful and empowering memoir, Becoming, was released in 2018, topping bestseller lists and selling millions, not just in America but around the world. The audiobook, beautifully read by Michelle Obama herself, won a Grammy in the spoken word category. The Obama’s production company, Higher Ground Productions, recently released a documentary of the same name, with Netflix, following the former first lady in an intimate look at her life throughout her book tour. Now, for her next trick, Michelle Obama has announced she will be hosting a new podcast series looking at relationships and health.

Titled the Michelle Obama Podcast, the series is set to address very real, important and personal topics in an approachable way. The series will debut exclusively on Spotify on July 29 2020 reaching nearly 300 million users across the world. Spotify’s statement read: ‘the show will bring listeners the First Lady’s most candid, human, and personal conversations to show us what is possible when we dare to be vulnerable.’

In keeping with her empowering and moving memoir, the new podcast sets to continue Michelle’s inspiring work in highlighting and opening up dialogues on important and personal issues that affect many of our lives. “My hope is that this series can be a place to explore meaningful topics together and sort through so many of the questions we’re all trying to answer in our own lives. Perhaps most of all, I hope this podcast will help listeners open up new conversations — and hard conversations — with the people who matter most to them. That’s how we can build more understanding and empathy for one another,” Michelle Obama explained.

In Michelle’s announcement video, she stated that she will be ‘discussing the relationships that make us who we are’ talking herself to many of those who she is closest with, friends, family colleagues, including her mother and brother Marian and Craig Robinson – an exciting addition for those who have read Becoming and know how close and loving their family is.

Hosting a variety of guests, Michelle Obama will hold open and honest conversations with figures from all walks of life, including, Dr. Sharon Malone MD, Craig Robinson, Valerie Jarett, Conan O’Brien, Michele Norris. Episodes will cover a range of different topics including, marriage, mentorship, sibling relationships, raising children, girlfriends to women’s health, Spotify listed. In the teaser video, Michelle also summarized that the podcast will cover ‘the challenges and joys of being a parent or a spouse. The friendships that help us through the toughest times, Or the growth we experience when we lean on the colleagues and mentors around us.’

Michelle went on to state: “what I love about these conversations is that they are topics and issues that we’re all dealing with no matter what’s going on whether that is a global pandemic or a nationwide reckoning with race.”

In 2019 former President Barack Obama and Michelle Obama’s production company Higher Ground Productions partnered with Spotify to produce exclusive podcasts for the series, with the aim to ‘entertain, inform, inspire, and to lift up new, diverse voices in the entertainment industry’. This is the first title in that partnership and sure to stick to those very aims.

In the press release Spotify’s Chief Content and Advertising Business Officer, Dawn Ostroff was quoted, stating: ‘At Spotify we seek to connect listeners with the world’s most authentic and compelling voices,” said. “We believe that audiences across the globe will be inspired by these most candid, most human and most personal conversations between First Lady Michelle Obama and her guests.’

Finishing her announcement video, Michelle Obama stated: ‘My hope is that this podcast can be a place for us to sort through the questions that we are all trying to answer. A place to open up and be a little vulnerable and have some fun along the way. And most importantly, I hope this podcast sparks ideas and topics that you can open up with, within your own circles. Maybe it will inspire you to have some conversations with loved ones that you’ve been meaning to have.’

Therapeutic Techniques To Address Feelings of Loneliness
Scroll to top