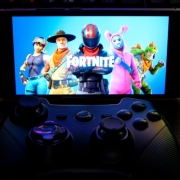 Microsoft have expressed their support for Fortnite game developer Epic in relation to its ongoing legal battle with Apple. According to a new legal declaration, Microsoft have thrown their weight behind Epic Games. The current court battle is centered around Apple’s decision to remove Fortnite from its App Store after Epic broke one of Apple’s policy rules.

Apple has decided to take serious action against the policy breaking, after Epic Games attempted to add a new payment system into the iOS version of the hit online shooter. As a business, Epic has shown extreme concern over the legal battle because of the significant impact it could have. It has been suggested that Apple will attempt to revoke Epic’s access to iOS and MacOS development tools. As BBC News reports, Microsoft have expressed that the decision will damage “critical technology” for third party game creators.

Microsoft additionally carries deeper concern over the legal battle because Epic Games owns another business called the Unreal Engine. As Sky News reports, Unreal Engine is “one of the most popular third-party game engines available to game creators”. It is a tool used by Microsoft themselves and is widely used by other developers from various studios to build games, VR experiences and special effects that are seen on TV and films. Epic has announced that the potential removal of access to be issued from Apple could affect users’ experience of other games such as the racing game Forza Street.

A recent court filing revealed that Microsoft is not alone when it comes to concerns of the impossibility of working with Unreal Engine, if Apple’s decision is approved. There have been thousands of other game developers that have reached out to explain how Apple’s actions could impact them. It is no surprise that Microsoft has supported Epic in this dispute as other tech giants such as Facebook are predicted to join the support network at a later date. It has been noted that Facebook has openly spoken about Apple’s App Store policies in a negative light.

A member of the senior team at Xbox Phil Spencer tweeted “Today we filed a statement in support of Epic’s request to keep access to the Apple SDK for its Unreal Engine. Ensuring that Epic has access to the latest Apple technology is the right thing for gamer developers & gamers”.

In Microsoft’s statement it explained “In Microsoft’s view there are very few other options available for creators to license with as many features and as much functionality as Unreal Engine across multiple platforms, including iOS”. Microsoft has commented that denying access to Apple development tools will put many creatives at a substantial disadvantage. As BBC News states “Apple’s discontinuation of Epic’s ability to develop and support Unreal Engine for iOS or macOS will harm game creators and gamers”.

However, Apple has expressed their strong power and application of equality suggesting that the rules cannot be changed for a giant game developer such as Epic. Apple commented the business “won’t make an exception for Epic because we don’t think it’s right to put their business interests ahead of the guidelines that protect our customers”.

It is not the first legal dispute Microsoft have been involved with with Apple, making Epic Games suitable allies for them. Previously Microsoft have openly criticized Apple’s App Store Terms. Microsoft did not approve that Apple would not allow Xbox game streaming on iPhones. Microsoft said Apple “stands alone as the only general purpose platform to deny consumers from cloud gaming and game subscription services like Xbox Game Pass”, they continue,”[Apple] consistently treats gaming apps differently, applying more lenient rules to non-gaming apps even when they include interactive content,” as reported by Sky News.

Game developer Epic has strengthened their argument opposing Apple after bringing an antitrust lawsuit against Apple in California, accusing the tech giant of exploiting its monopoly over the App Store. Apple are planning to revoke Epic’s developer accounts by the 28th August, however in response to this Epic have requested for a temporary restraining order to prevent this happening.

Apple has announced they will not carry out action against Epic if the business removes the direct payment functionality that has been installed in the Fortnite app. This was installed as a way to ensure Epic received all the profits from gaming purchases rather than Apple taking a 30% cut of in app purchases. Epic has claimed that users benefited from the payment system as it allowed the business to make in app purchases, for example Forrnite V-Bucks, cheaper.

On the 31st August, the court will continue the case to announce whether the temporary restraining order is agreed to. If the decision is favorable to Epic, it will mean Apple will keep Fortnite available on the App Store until the lawsuit has concluded.