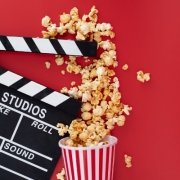 Before the world was set to stop due to the coronavirus pandemic, the film industry had big plans for 2020 and it appears these are back on cue. The highly anticipated Mission Impossible 7, that will see Tom Cruise return as senior field operations agent Ethan Hunt, has excited fans by announcing a return to filming.

The film’s director, Christopher McQuarrie, was noted to have shared an image on Instagram captioned ‘Action…#MI7 Day 1’. The shot capturing a snow lined mountainous setting donnes the focal point of a constructed ramp, composed onto a giant scaffolding platform, elevated high into the frosty sky. A figure dressed in black is positioned at the bottom of the ramp, and staring up at the immense elevation into the air against the sheer drop of snowy valleys.

The impressive image set with a stunning background of blue sun-filled skies against the impending mountains and crisp white of the snow, are believed to that of Norway in the district of More og Romsdal, and set at the foot of the ramp is none other than Tom Cruise himself.

Set to capture one of many exciting stunts we can expect to see in movie theaters 2021, Tom Cruise is known for bravely completing his own stunts. The actor, now 58 years old, was seen launching into the air aboard a motorbike which he would ride off the edge of the purposely built ramp located on the mountain Helsetkopen.

The ramp enclosed a flat build up from which Tom would gain momentum on the motorbike and propel him into the sky. To complete the stunt he will let go of the bike which will plummet to the valley below whilst he falls to the ground safely aided by a parachute.

With a helicopter seen trailing the big budget set, the stunt was reported by crew to have taken 4 attempts to catch on film.

He has also been seen bringing more action packed scenes to life, again in all black attire and a face mask; he had been rehearsing scenes with a fellow stuntman to take place on top of a train. Attached to a harness above the train and encompassed in scaffolding, no expense was spared to recreate the scenes safely in the beautiful Norwegian countryside.

Like many others, the film had been on hold for 7 months due to the coronavirus pandemic. Filming had been set to take place in various locations across Europe, but the pandemic led to filming being suspended when countries located across the continent entered into lockdown and both quarantine and travel restrictions were imposed.

The last known filming took place back in February and was set in Venice. With Italy going into full lockdown on 9th March, and other countries across Europe such as Spain soon to follow. it was appropriate to suspend filming. During the time that production had been on hold, the makers of the film have had to put a new plan together for filming with looming contingency for further outbreaks or lockdowns over the course of the pandemic. When it could take place they needed to ensure that all elements of filming adhered to regulations and social distancing aspects for the safety of all involved.

To accommodate filming whilst in Norway, the film’s leading star, Tom Cruise has reportedly hired 2 cruise ships to house production crew and all staff during their time in Norway. The ships that have been rented by the MI production team have been disclosed as the MS Fridtjof Nansen and the MS Vesteralen and shall be bestowed upon until filming in the region draws to a close at the end of September. The unusual accommodation is believed to cost the actor around £500,000 but it is hopeful that will limit further disruptions to the filming of the latest movie installments in the Mission Impossible franchise.

The cast and crew, headed by the film’s frontman are more determined than ever to complete the filming, set to shoot footage for not only the seventh but also the eighth film in one go. They wanted to make certain that this plan could go ahead by spending the past months focused on planning and procurement, including securing consent from countries to ensure filming. We can expect to see more images revealed over the course of filming and look forward to seeing Tom back as Ethan and reuniting with his mission impossible team stars such as Ving Rhames and Simon Pegg. Despite delays Mission: Impossible 7 is scheduled to be released in November 2021 and with the eighth installment to follow in November 2022. One thing is for sure, fans across the world are hoping that this will indeed continue as planned and that the pandemic won’t inflict further delays on these much awaited installments.

Consumer Confidence At All Time Low