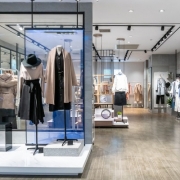 Retail businesses across America have suffered a heavy decline in sales during the first half of 2020, mainly due to the coronavirus pandemic that has taken over the world.

Spanish clothing retailer Zara is one of the companies that have struggled resulting in their recent announcement that they will be closing up to 1,200 of their smaller stores around the world, as they try to increase their sales online.

According to Inditex – the company who owns Zara alongside other fashion retailers including Pull&Bear, Massimo Dutti and Oysho – the company will ‘absorb’ the shops with older stores from other brands that have also seen losses.

Although not affecting their outlets in America, it is believed that the closures will be predominantly throughout Asia and Europe.

However Inditex, who is one of the world’s largest clothing retailers, have confirmed that the “headcount will remain stable” with any staff potentially losing their positions being offered other roles in different areas of the company.

So far Inditex has seen their sales drop by around 44% between 1 February to 30 April to $3.7 billion, a net loss of $465 million for the quarter due to nearly 25 per cent of their stores continuing to stay closed due to lockdown restrictions.

Many retailers have had to look at how their business models work with the pandemic highlighting how bricks and mortar businesses have suffered. Those companies that also have an online presence have seen sales grow as their footfall sales drop. Companies that are purely online – such as Amazon – have seen substantial growth, with Amazon reporting sales of around $11,000 per second.

The retail industry has continued to see big named brands close due to the coronavirus pandemic, including department store chain J C Penny who went into bankruptcy in May.

In an attempt to beat the online challenge of competitors including H&M and Fast Retailing – who own Uniqlo – Inditex are pushing their online outlets, something that is seen as essential in an era where online only companies including Boohoo and Asos have seen substantial growth.

The plans drawn up will see Inditex concentrate their efforts to grow their online sales to over 25% of their total sales by 2022, an increase of 11% of its sales for the 2019 financial year. They are also planning to incorporate their larger shops as ‘distribution hubs’ for online sales.

A budget of $1.13 billion has been set aside by Inditex to invest in their online department while around $1.93 billion has been budgeted for stores to increase their website facilities, including product trackers and increasing their delivery times.

Inditex is not the only retailer that has announced closures. Fairn & Swanson, as well as their subsidiary Baja Duty Free, have also confirmed they are to cease trading citing the pandemic as the reason announcing, “due to the Covid-19 lockdown, Fairn & Swanson has been closed.”

And a further statement from Baja Duty Free said, “Unfortunately the Covid-19 situation we are all facing has affected our company drastically. We have made the decision to close all our Baja Duty Free stores.”

They continued, “We thank all of our customers, staff and suppliers for their loyalty and support through all the years we were in business. You are and will always be part of the Baja Duty Free family.”

A Chapter 7 bankruptcy petition was filed by the company at the beginning of June and called for the liquidation of the company. There are currently no plans to reorganize.

Nicole Uhlig, daughter of the company’s founder Wolfgang Uhlig spoke to Travel Market Insider (TMI) and confirmed the news saying, “[Closing] is so sad for all of us at F&S, Baja and the duty free industry partners that are affected. The times have changed and our family company couldn’t make it through 2020 Covid-19. Wolfgang and his legacy will never be forgotten in the duty free industry.”

In 1949 Fairn & Swanson started selling their duty free products to ships and boats that entered the Port of San Francisco and grew to become one of the largest duty free wholesale and retail companies.

Baja Duty Free were founded in 1989 and had several stores on the US-Mexico border, including El Paso, San Ysidro and Eagle Pass.