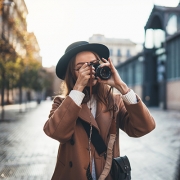 Jack Mitchell’s collection documents the dance company’s evolution while capturing the true idiosyncrasies and physicality of movement through still images. The photography showcases the innovative performances and groundbreaking artistry of Ailey, who shined a spotlight on the contributions and experiences of the African American heritage that inspired the racially diverse performances he presented that forever changed American dance and culture.

Acquired in 2013, the entire digitized photography collection has been recently made available to the public online via the Smithsonian’s Online Virtual Archives. The collection is jointly owned by the National Museum of African American History and Culture and Alvin Ailey Dance Foundation.

“To have one photographer as talented as Jack Mitchell capture the Alvin Ailey American Dance Theater’s history allows us to really witness the groundbreaking and historic nature of Alvin Ailey’s dance style and his vision for a dance company,” said Spencer Crew, interim director of the National Museum of African American History and Culture. “It’s particularly difficult to capture the essence of performing arts in photography, yet this collection showcases the ephemeral nature of the performances that made the Alvin Ailey American Dance Theater so special to so many audiences around the world.”