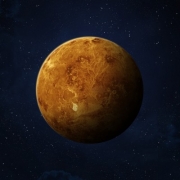 The quest to prove that we are not alone in the universe is one which continues unrequited, which is why the latest discovery of phosphine gas on Venus has led some experts to debate whether this could well be an indicative sign of life on the gassy and seemingly inhospitable planet.

Astronomers studying the planet have discovered that it’s clouds appear to contain a smelly, toxic gas called phosphine, which is known to be produced by bacteria. The report entitled ‘Phosphine gas in the cloud decks of Venus’ were published on September 14th in Nature Astronomy, where it was revealed that the clouds contained up to 20 parts per billion of phosphine. Researchers believe that these levels are high enough to suggest that something must be producing it rather than it being caused by unrelated environmental factors, such as moving tectonic plates or asteroid collisions. That said, there may still be a host of plausible explanations for why this gas is present, but if no valid explanations can be found, then it could be a small but extremely significant indicator that life exists on the planet. Even so, researchers are clear to point out that there is a very clear difference between life and ‘possible signs of life’.

We also have to remember that although Venus is a similar size and mass to Earth, the conditions are quite different. It is reported to have a melting hot surface ‘sulfuric acid rain and crushing atmospheric pressures’. That said, this is only the case for the surface itself and there is speculation that certain areas of Venus may gain some relief from the punishing conditions. Researchers have explained that around 50km above the surface of Venus, the temperatures and pressures are very much like what we would find here on Earth. So although a landless existing up in the air hardly seems plausible by our earthly measures, from a scientific perspective it is classified as hospitable conditions for life.

The reason for the significance of phosphine is that on Earth, the only microbes that produce it are those which do not use oxygen and live in places like sewers, swamps and in the intestinal tracts of animals. The only other method of production is via industrial means, such as in the production of plastics. Given the two scenarios for the presence of the gas n on Earth, it can be seen why the assumption that it has been produced by some kind of living organism makes sense above any kind of industrial source.

To further strengthen the argument, phosphine is known to break down quickly when exposed to sunlight and to sulfuric acid. As both of these are present in the atmosphere on Venus, this would suggest that old phosphine would have dissipated some time ago. For the levels that were seen to still be present, they must have been produced more recently and they must be coming from a specific source.

Such findings provide a compelling argument to continue researching the planet further. However any thorough explorations to date have been thwarted by the persistently violent conditions on the planet which would simply destroy any of the space exploration vehicles that have been launched into space to date. That said, a number of space agencies are looking at ways in which they could feasibly lead a mission to Venus in the future, as there is clearly much to learn about the curious planet.

There has long been debate as to whether life could be housed on Venus. More revelations from NASA have revealed that ancient venus had enough water to support ‘abundant life’, possibly for around 2 billion years. A resimulation of Venus based on its current day length combined with shallow waters and an atmosphere similar to Earth revealed that Venus would have been exposed to the sun for around two months at a time. This would have allowed the waters to heat up and rain to fall, creating clouds which would have protected the planet from the damaging effects of solar heating.

The presence of phosphine was first detected in the clouds by astrologers in 2017 and again in 2019, suggesting that something was continuing to produce this gas and that it wasn’t just reminisce of something previously there at some point in the planet’s distant past. Whilst this is certainly an exciting find, we must also bear in mind that we are only comparing the findings to what we know about earth. There could be a number of plausible explanations for the presence of this toxic gas which even the most experienced of scientists are currently unable to fathom. Or it could be the biggest indicator we’ve found so far that some kind of organism has been able to survive on Venus despite its punishing conditions. Either way, there is compelling evidence that we should consider placing Venus at the top of the space exploration agenda.

Concern Over Serious Side Effect Suffered In Covid-19 Vaccine Trial