You are here: Home1 / Features2 / Lifestyle Feature3 / Niche Dating Sites Are Helping People Find Love In The Most Unique Ways...

Dating Apps that focus on individual passions are rising in popularity, one of the most unique being FetchaDate, a dating service used for pet-owners to find love. 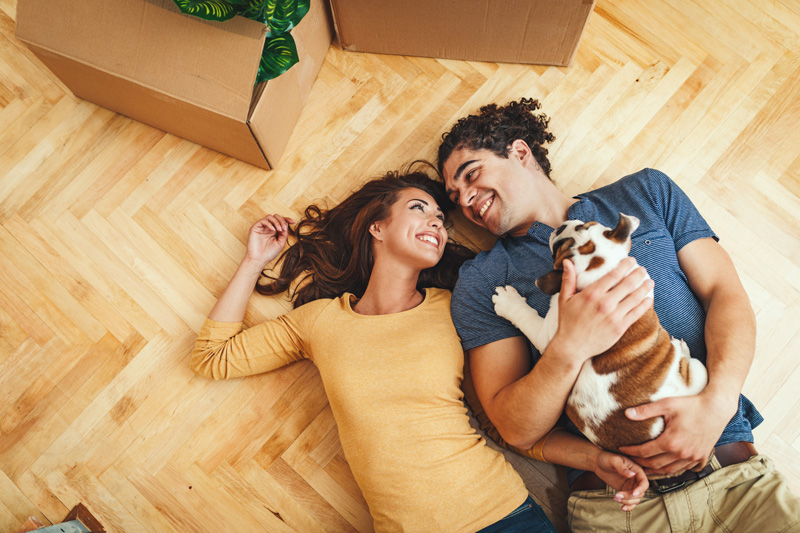 There are currently over 8,000 dating sites operating around the world. The Covid-19 pandemic has caused every single one of them to see a massive increase in user traffic, however, with so many options available, many individuals are finding it difficult to decide what service will give them the best shot at finding a genuine love connection. This has led to a rise in more niche dating sites that allow individuals to find some common ground with a potential partner before they even match with them.

Dating in general is a very complex experience. Claire Bahn is a dating expert who recently wrote an Op-Ed piece on why the rise in specialized dating sites makes sense considering that “getting your specific expectations met is the most important foundation to building a relationship.” She explained that in a best case scenario dating experience, you find a person who you immediately connect with on personal interests, and feel comfortable being your full authentic self with, but more realistically, you’ll find someone who won’t check all your boxes, and that’s okay if the foundation is strong.

A niche dating site is defined as a website or application that’s specifically designed for people with similar interests, traits, or personal experiences to connect with one another. “Through a niche dating site, you can find someone and build a relationship based on specific choices and preferences, which will thus ensure that the foundation is strong,” according to Bahn. These sites allow users to cut through the awkward small talking phase that most other apps force upon new matches, and instead gives them an immediate personal connection to one another.

One of the most unique applications that has hit the online dating scene is FetchaDate, a dating app that is “designed to help singles meet over what they already love, their pets,” according to CEO Sheryl Matthys. As of last year more than 78 million households in America owned dogs while over 85 million owned cats, according to the American Society for the Prevention of Cruelty to Animals. However, that number is thought to be much larger with the pandemic and lockdown causing a massive rise in pet adoption nationwide. Matchmaking services have also become a billion dollar industry due to the pandemic, so Matthys knew that now was the perfect time to introduce the world to the app that creates connections through our pets.

“People generally seem more approachable when they have an animal. This is not just a standard hookup app, it’s more authentic and filled with people who are looking for real love because they’re using the real loving relationship with their pet to find it. ”

Sheryl Matthys originally started her pet owner matchmaking journey back in 2004, when she lived in New York City. Matthys would host events once a month throughout the city, and other cities in the US as well, that were meant for single pet owners to come, mingle, and potentially find a connection. Growing up on a farm and surrounded by a wide variety of animals for her whole life, she knew that the connections we have with our pets are extremely important and intimate, so starting a romantic relationship based on that very deep connection sets a standard for the future.

Eventually, Matthys was being contacted by individuals all across the country, and found herself unable to keep up with the demand for all the in-person single pet owners events, so creating an app that could be widely available to any smartphone user just seemed like the perfect move. “Pets help people let down their walls and discuss who they are at their core. It’s less about looks, your job and general hobbies, which other apps tend to emphasize, and instead users use their pet connection to ask larger questions like ‘what do you want to do with your life,’ or ‘how do you find joy in your day to day life.’ Also, who doesn’t look more attractive with a pet next to them?”

Users sign up using their phone number, an aspect of the app that’s quite unique when compared to other dating services that typically ask for a user’s Facebook information or email. “Through the ever changing atmosphere that is modern technology, we figured letting our users sign up through their phone numbers was the easiest and safest way to go about it. They’re already on their phones anyway to use the app, and using their personal number is the best way to verify that they’re an actual real person, and not a bot trying to get on the app.”

Once you sign up with your number and it’s verified; you simply upload a picture of yourself, and then a picture of your furry friend, which will be the first thing other users see. Matthys also explained that for users who are maybe between pets right now, or are just general pet lovers but in a living situation that doesn’t allow them to own a pet, they can use a “virtual pet” from the site to describe themselves or the type of pet they usually own.

“Since pets are natural icebreakers, subscribers meet the ‘pack’ right from the start in the ‘Fetch Who’s Behind’ game. Your pet making your introduction before you’re seen is mysterious as the pet gives clues about you enticing users to tap to reveal more,” says Matthys. She also wanted the FetchaDate App to be accessible for every smartphone user, regardless of if you have an iPhone, Android, or Google device, so she made sure it would be made available, for free, on the Apple Store as well as Google Play. 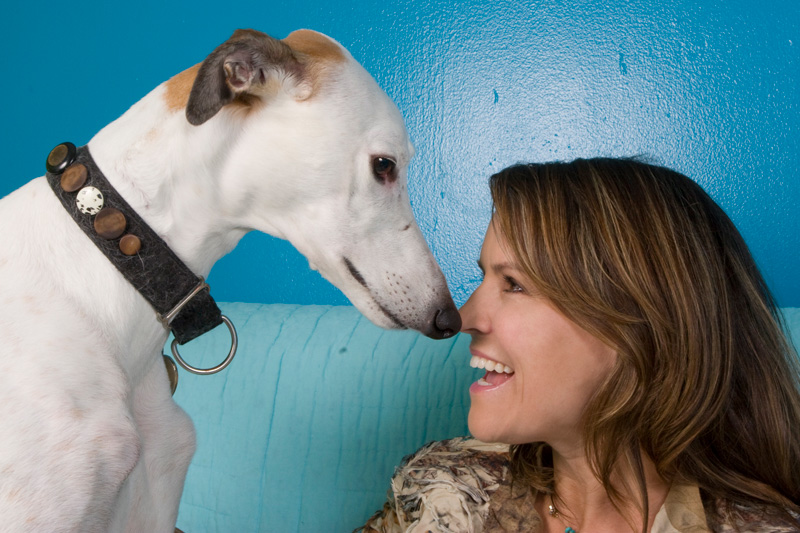 “FetchaDate is the place where pet lovers can use their furry friends as a wingman. It doesn’t get much better than having your pet do the work for you, and since we’re a site for pet lovers only, it’s almost guaranteed that you’ll make a connection right away when you match with someone.” 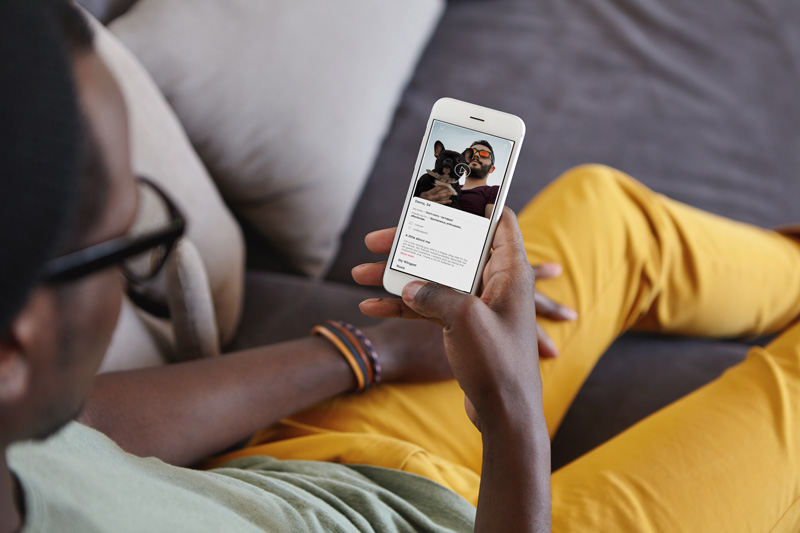 As mentioned by Matthys, when you’re scrolling through looking for potential matches you’re entered into the “Fetch Who’s Behind” game, where a stack of users have real or virtual pets ranging from numerous dog and cat breeds or a virtual horse, parrot, turtle, snake, pig, or fish to make your introduction. Every user’s pet has a display name, breed, and 3 personality traits chosen by you from a list of predetermined adjectives. Your personal profile will contain your name, age, location, personal motto, profession, 5 “favorite interests” of yours and 3 personality attributes that you think your friends would use to describe you.
When you first see a pet in that stack, you’ll be able to scroll through a list of clues that the pet leaves about its owner.  Users can then choose between tapping on a blurred photo of the owner, or swipe right on a pet to see if you’re an instant match (meaning its owner swiped right on your pet), so your “WingPet” really is making the matches for you.

FetchaDate also offers enhanced features that subscribers can purchase within the app itself. Your initial profile just allows for one additional pet profile, but you’re able to purchase up to four if you have more than one pet you would like to display. Only one of the pet profiles is displayed to other users at a time, which can help increase your profile’s visibility.

“Even if you’re using a virtual pet, whichever animal you choose shows that there’s an underlying desire for you to either own that animal, or you feel some sort of deep connection to it, which is very personal. So when you think about it whether it’s a real or virtual pet, you’re already basing your new connection off of a very personal and intimate relationship that already exists within your life.”

“Pets can sniff out when a genuine relationship connection is there and people sometimes trust their pets opinion on a significant other more than their friends. Even when I hosted events where people could meet up and get to know one another through their pets, I noticed everyone getting to know everyone and it wasn’t just in a romantic context. New friendships were also made over the bonding of loving our pets so it’s a very powerful thing to share that type of intimacy with someone else.”

If you’re interested in making a connection with your furry best friend, check out FetchaDate now!