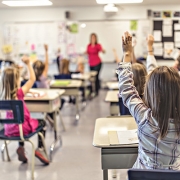 CHICAGO (Reuters) – Classes for more than 300,000 students in Chicago were canceled for a third straight school day on Monday, although striking teachers reported progress over the weekend over issues such as class size and staffing in the Chicago Public Schools (CPS), the third-largest U.S. system.

Some 25,000 teachers went on strike last Thursday after their union was unable to reach an agreement with Chicago Public Schools over pay, overcrowding in schools and a lack of support staff, such as nurses and social workers.

At a news conference on Monday morning, Chicago Teachers Union President Jesse Sharkey said that over the weekend, the board of education gave the union written proposals about reduced class sizes and increased staffing.

But he said the board still had not met certain union demands, such as improved clinical services for students and staffing a school nurse in every school every day.

“We’re optimistic that this does not have to be long, but there does need to be a commitment of new resources,” Sharkey said.

Mayor Lori Lightfoot wrote a column for the Chicago Sun-Times newspaper on Sunday in which she noted her own background growing up in a disadvantaged school district, saying she understands how important educational equity is.

“I am disappointed that the Chicago Teachers Union has decided to strike,” she wrote. “I believe our contract offer is fair and respectful of the union’s leaders and their members. But my disappointment will absolutely not soften my resolve to reach an agreement.”

The strike is the latest in a recent wave of work stoppages in school districts across the United States in which demands for school resources have superseded calls for higher salaries and benefits.

In Chicago and elsewhere, teachers have emphasized the need to help underfunded schools, framing their demands as a call for social justice.

Although the latest work stoppage has forced officials to cancel classes, school buildings are staying open for children in need of a place to go.

The strike comes seven years after Chicago teachers walked out for seven days over teacher evaluations and hiring practices. In 2016, teachers staged a one-day walkout to protest the lack of a contract and failure to stabilize the school system’s finances.

The district has offered a raise for teachers of 16% over five years, enforceable targets for reducing class sizes and the addition of support staff across the district, according to Lightfoot, who was elected in April.

How to Stay in the Moment when Traveling