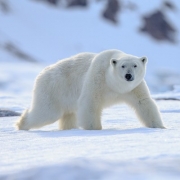 ‘The icecaps are melting’ is a fairly well-known fact, among many others, at the forefront of climate change concerns. Polar Bears are the poster child for the affects climate change has on the arctic. As global temperatures warm up due to high levels of greenhouse gas emissions in the atmosphere, various aspects of the worlds eco-system are harmfully and detrimentally affected, from the bleaching of coral reefs to the melting sea ice in arctic regions among much else. What perhaps is not as well-known is the immediate and far-reaching knock on effects the disappearance of icecaps has on the planet – ecosystems, wildlife and humankind alike. One such consequence is the slow starvation of Polar Bears, for which scientists have now predicted an extinction timeline for the first time. In short, due to the current course of climate change, Polar Bears are not likely to make it into the next century, with reproduction problems beginning as early as 2040.

A new study, published recently in Nature Climate Change which looked to predict the decline of Polar Bear populations amongst global warming and sea-ice loss. Polar Bears live much of their lives on sea-ice, predominantly requiring the ice to hunt and raise their young. This rapid decline of sea ice, means that there are less seals to hunt and polar bears having to travel at greater distances to find a suitable hunting ground or space to raise young. Polar bears are thus fasting for longer, unable to feed cubs and thus dying from starvation and exhaustion. The lack of ice to nurse young alongside the aforementioned issues also means that reproductive rates will drop as a consequence. The National Snow & Ice Data Centre has found that 13% of Arctic Sea Ice has been lost each decade since the 1970’s. The study entitled ‘Fasting season length sets temporal limits for global polar bear persistence’ in Nature Climate Change outlined in its abstract:

‘Here, we establish the likely nature, timing and order of future demographic impacts by estimating the threshold numbers of days that polar bears can fast before cub recruitment and/or adult survival are impacted and decline rapidly. Intersecting these fasting impact thresholds with projected numbers of ice-free days, estimated from a large ensemble of an Earth system model, reveals when demographic impacts will likely occur in different subpopulations across the Arctic.’

Andrew Derocher, University of Alberta polar bear researcher, told the New York Times: “The study shows clearly that polar bears are going to do better with less warming, but no matter which scenario you look at, there are serious concerns about conservation of the species.”

Marked as a vulnerable species, there are approximately 25,000 wild polar bears on earth and among the largest bears on the planet. Polar bears rely on hunting in winter months to make up for fasting periods during summer months where food is scarcer and the ice is naturally lessened. However, climate change has detrimentally affected this process, melting ice-caps permanently or for longer, meaning that polar bears are fasting for much longer. The study estimated ‘how thin and fat polar bears can be and modelled the animals’ energy use to derive the threshold number of days they can fast before cub and adult survival rates decline,’ the Guardian reported.

Dr Steven Amstrup, involved in the study and chief scientist of Polar Bears International, told the BBC, “What we’ve shown is that, first, we’ll lose the survival of cubs, so cubs will be born but the females won’t have enough body fat to produce milk to bring them along through the ice-free season. Any of us know that we can only go without food for so long,” he added, “that’s a biological reality for all species”.

Discussing the part of the study which demonstrated when the thresholds would be met by Polar bear subpopulations in different parts of the Antarctic, Dr Amstrup also stated: “[This shows] how imminent the threat is for different polar bear populations is another reminder that we must act now to head off the worst of future problems faced by us all, the trajectory we’re on now is not a good one, but if society gets its act together, we have time to save polar bears. And if we do, we will benefit the rest of life on Earth, including ourselves.”

Preventing Burnout From Overworking At Home