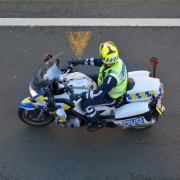 June 18 saw shocking scenes in New Zealand’s capital Auckland after two officers were shot during a routine traffic stop and the culprit escaped capture for a day. A man has now been charged with murder and New Zealand police continue to investigate.

Police officials have said that the two officers were conducting a routine stop in the West Auckland suburb of Massey on Friday. Before being given the chance to react, both officers were shot, one fatally, and a member of the public was struck and injured by the assailant’s car. The second officer received a shot to the leg and was rushed to hospital but is now in a stable condition and looks set to make a recovery.

New Zealand police commissioner Andrew Coster described the incident during a press conference, saying that officers spotted the vehicle as a car of interest and sought to pull it over as usual. The car quickly drove off, instead, and the officers quickly lost sight.

They found the car further down the road after it crashed and as the officers approached the vehicle, a man stepped out with a long-barreled gun and opened fire. The offender then approached and entered another car, escaping with the help of another person, according to Coster.

The deceased officer is the first to be killed while on duty in New Zealand in over a decade.
“We all know being a police officer is a risky job, but officers live with the expectation that they will go home at the end of their shift. Their families live with that expectation too, and they have every right to see their loved ones home safely,” New Zealand Police Association President Chris Cahill said.

“The association’s role is now to wrap its support around these families, friends and colleagues and make sure we are there for them in the difficult times ahead.

“I want them to know that while we can’t even begin to understand the pain they are now faced with, police is a whānau of 14,000 plus and it is a whānau that, regrettably, has had to pull together in similar circumstances in the past and will do so again.”

Cahill also went on to indicate that the incident demonstrates the immeasurable risks that officers face in everyday routine policing and highlights the dangers of the proliferation of firearms in the hands of criminals.

“It is an absolute tragedy that the very people who run towards danger to keep us all safe, can end up paying the ultimate price in the line of duty,” he said.

“It is now the job of colleagues of the officers caught in this Massey event to find the person responsible, and I have every confidence in their professionalism and ability to do that as soon as possible.”

A manhunt was launched immediately after the incident, with schools and businesses in the area going into lockdown. A man aged 24 was arrested and charged hours afterwards and police were also able to find the suspected firearm. It is rare for police officers to carry guns in New Zealand, but an emergency general police arming order still remains in place in the nation’s capital.

“I feel sick, I feel shattered…. someone came to work today to save the lives of others and they are going home in a box,” a colleague of the involved officers told the New Zealand Herald.
“We took 60,000 guns off the streets in the buyback and then to have the first death in 11 years – a police officer gunned down, gunned down and slaughtered…. it’s absolutely awful.”

Following the Christchurch mosque mass shooting last year in which 51 people were killed, the New Zealand government implemented a mass amnesty and buyback of firearms in the country.

Legislation was also introduced to ban semi-automatic firearms and magazines with a capacity of more than 10 rounds, but with the number of firearms on the street growing in recent months, there has been recent debate in the country over whether New Zealand police officers should carry weapons with them.

“We want all our Police officers to get home safely at the end of every working day. This is a tragic day for our Police family,” Chris Cahill continued in his statement.

“We have another officer injured by gun fire and a member of the public has also been injured by a fleeing offender. Our thoughts are with them.

“I have spoken to the Commissioner of Police this morning to ensure that he and his senior commanders have all the resources they need to respond. Police will provide further updates as they are able to.

“The officers’ families and colleagues also need all the support they can get. This will take a toll on them in the days and weeks ahead.

“I want to thank those who were first on the scene to help and acknowledge the health professionals who worked to treat the officers.

Thousands of Celebrations of Juneteenth Across The US
Scroll to top