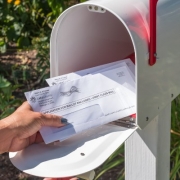 The Department of Homeland Security has issued an intelligence bulletin warning that it has found that Russia is intentionally spreading doubt about the upcoming elections by undermining the mail-in voting system and claiming it will result in mass voter fraud.

President Donald Trump has been claiming for months that mail-in voting will result in widespread voter fraud, claims that studies and experts have not been able to back up.

“We assess that Russia is likely to continue amplifying criticisms of vote-by-mail and shifting voting processes amidst the COVID-19 pandemic to undermine public trust in the electoral process,” says the bulletin, first reported by ABC News, “Russian state media and proxy websites in mid-August 2020 criticized the integrity of expanded and universal vote-by-mail, claiming ineligible voters could receive ballots due to out-of-date voter rolls, leaving a vast amount of ballots unaccounted for and vulnerable to tampering,” the bulletin notes.

“These websites also alleged that vote-by-mail processes would overburden the U.S. Postal Service and local boards of election,” it continues, “delaying vote tabulation and creating more opportunities for fraud and error.”

The bulletin was released just a day after Attorney General Bill Barr criticized states that encouraged citizens to vote via mail.

Additionally, Barr denied that Russia was attempting to help President Trump in the upcoming election and instead blamed China, despite various intelligence agencies having said that there is no evidence of Beijing interfering in this election cycle.

“The new bulletin from the DHS Office of Intelligence and Analysis underscores two concerning facts: First, as the Intelligence Community confirmed last month, Russia is once again seeking to interfere in our elections and sow distrust in our democratic process,” said Democratic chairman of the House Intelligence Committee Rep. Adam Schiff in a statement released in response to the bulletin.

“And second, among the range of measures it is pursuing, Russia is echoing destructive and false narratives around vote by mail that President Trump and his enablers, including Attorney General Barr, have been aggressively promoting.”

“This bulletin further demonstrates why the ODNI’s cancelation of in-person briefings on election security for Congress is so dangerous—Congress must be able to directly question and engage with the intelligence community professionals with the responsibility for protecting our elections from foreign interference,” Schiff continued.

CNN have reported that Schiff has requested a briefing about the DHS bulletin and the one previously released, with the 60-year-old asking questions of the Department as his committee continues to investigate the politicization of intelligence agencies.

Along with some US intelligence officials, the Senate Intelligence Committee has been strong in their allegations of the actions they believe Russia has and will take during the election after it hacked the Democrats four years ago and ran covert social media campaigns to help influence the results in both 2016 and 2018.

“This most recent DHS intelligence report along with other recent reporting by intelligence and law enforcement entities should put to rest any doubts that Russia is spreading conspiracy theories and lies in an effort to influence the outcome of the 2020 election by undermining confidence in the election process and influence voter opinion,” said John Cohen, the former undersecretary for intelligence at DHS during Barack Obama’s tenure as president.

“Decisions made by state election officials on expanding vote-by mail and adjusting in-person voting to accommodate challenges posed by Covid-19 have become topics of public debate.

“This public discussion represents a target for foreign malign influence operations that seek to undermine faith in the electoral process by spreading disinformation about the accuracy of voter dater for expanded vote-in mail, outbound/inbound mail ballot process, signature verification and cure process, modifying scale of in-person voting, and safety and health concerns at polling places, according to CISA guidance documents provided to state and local election officials.

“Throughout the 2020 primary elections, Russian state media and proxy websites amplified public narratives about shortcomings in ballot delivery and processing, such as claims that voters would not receive their mail ballot in time to cast their vote. These website highlighted reductions in the number of in-person polling places in large cities due to the pandemic and the long lines this caused, claiming this would disproportionately suppress voting among African-Americans and expose them to the spread of Covid-19.”