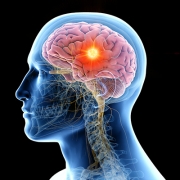 We humans have evolved a rich repertoire of communication, from gesture to sophisticated languages. All of these forms of communication link otherwise separate individuals in such a way that they can share and express their singular experiences and work together collaboratively. In a new study, technology replaces language as a means of communicating by directly linking the activity of human brains. Electrical activity from the brains of a pair of human subjects was transmitted to the brain of a third individual in the form of magnetic signals, which conveyed an instruction to perform a task in a particular manner. This study opens the door to extraordinary new means of human collaboration while, at the same time, blurring fundamental notions about individual identity and autonomy in disconcerting ways.

Direct brain-to-brain communication has been a subject of intense interest for many years, driven by motives as diverse as futurist enthusiasm and military exigency. In his book Beyond Boundaries one of the leaders in the field, Miguel Nicolelis, described the merging of human brain activity as the future of humanity, the next stage in our species’ evolution. (Nicolelis serves on Scientific American’s board of advisers.) He has already conducted a study in which he linked together the brains of several rats using complex implanted electrodes known as brain-to-brain interfaces. Nicolelis and his co-authors described this achievement as the first “organic computer” with living brains tethered together as if they were so many microprocessors. The animals in this network learned to synchronize the electrical activity of their nerve cells to the same extent as those in a single brain. The networked brains were tested for things such as their ability to discriminate between two different patterns of electrical stimuli, and they routinely outperformed individual animals.

The new paper addressed some of these questions by linking together the brain activity of a small network of humans. Three individuals sitting in separate rooms collaborated to correctly orient a block so that it could fill a gap between other blocks in a video game. Two individuals who acted as “senders” could see the gap and knew whether the block needed to be rotated to fit. The third individual, who served as the “receiver,” was blinded to the correct answer and needed to rely on the instructions sent by the senders.

The two senders were equipped with electroencephalographs (EEGs) that recorded their brain’s electrical activity. Senders were able to see the orientation of the block and decide whether to signal the receiver to rotate it. They focused on a light flashing at a high frequency to convey the instruction to rotate or focused on one flashing at a low frequency to signal not to do so. The differences in the flashing frequencies caused disparate brain responses in the senders, which were captured by the EEGs and sent, via computer interface, to the receiver. A magnetic pulse was delivered to the receiver using a transcranial magnetic stimulation (TMS) device if a sender signaled to rotate. That magnetic pulse caused a flash of light (a phosphene) in the receiver’s visual field of the receiver as a cue to turn the block. The absence of a signal within a discrete period of time was the instruction not to turn the block.

Skin Cancer Diagnosis Using AI Technology Could Be As Accurate As Clinical ...