Blog - Latest News
You are here: Home1 / Around The Web2 / Science3 / Scientists Fear Major Volcanic Eruption in the Philippines 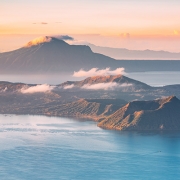 Researchers in the Philippines are monitoring the Taal volcano closely for signs of a major eruption. The volcano’s activity has eased since it began spewing steam and ash more than a week ago, but the threat of a large-scale eruption remains, say scientists. In addition to the immediate risk to life, such an event could contaminate water supplies and disrupt power generation for millions of people, and halt ground and air travel.

At 2:30pm local time on 12 January, Taal — which is on an island about 60 kilometres south of the capital Manila — started ejecting lava and blew a giant plume of rock fragments, known as tephra, up to 15 kilometres high. Ash travelled as far north as Quezon City, some 70 kilometres away, forcing tens of thousands of people living on Taal’s Volcano Island and in nearby provinces to evacuate.

The volcano’s activity has stalled, but this does not mean the worst is over, says volcanologist Mariton Bornas, who heads the division responsible for monitoring and predicting eruptions at the Philippine Institute of Volcanology and Seismology (PHIVOLCS), a government agency in Quezon City, just north of Manila.

The volcano remains at level 4, the second-highest level on the country’s volcano-alert system, which means a hazardous eruption could happen in hours or days. Scientists say the threat of a major eruption remains high because PHIVOLCS has reported some 450 volcanic earthquakes in the past 24 hours, as well as the emergence of fissures, and receding of the surrounding lake. The ongoing seismic activity suggests that magma is continuing to rise to the volcano’s surface from deep within the Earth, says Bornas.