Blog - Latest News
You are here: Home / Around The Web / Science / Scientists Find Connection Between COVID-19 and Inflammatory Disease 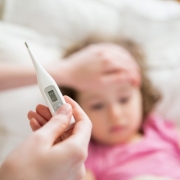 Italian doctors have found evidence of a potential link between COVID-19 and an inflammatory disorder that is resulting in the children infected needing life-saving treatments. The disorder has been suggested to cause serious complications for the health of some children. Even though reports have stated previously that cases of coronavirus in children are rare compared to adults, it has to be noted they are not immune to COVID-19.

In many countries around the world such as the UK, Italy and Spain children have suffered with this disease. In New York 93 children have been identified to have the disorder, that scientists believe is related to having COVID-19 or having the antibodies your body produces to fight it. The BBC reports “The Centers for Disease Control (CDC) in the US is set to issue an alert and updated definition of the syndrome to healthcare providers this week.” With this information, scientists and medical professionals can start to uncover the effects of this disorder. In the UK, 100 children have been identified to have a link between COVID-19 and the disorder. Recently, in April medical professionals warned the NHS of the connection that children could have therefore scientists are working around the clock to find evidence to solidify this. In Northern Italy, 10 children have been identified to have the disorder. These children have previous signs of toxic shock which some believe could trigger the illness.

Scientists have defined the disorder as Kawaskai disease. The most common symptoms include a high fever, red eyes, swollen glands and cracked lips. It has been noted that most children do not have any significant lung or breathing problems. As the BBC reports the disorder “mainly affects children under the age of five” however there have been a minor number of cases that could suggest the disease could affect older children up to the age of sixteen.

Medical professionals believe the disease could be triggered by the excessive immune reaction that is recurring in COVID-19 children. Doctors in Bergamo, Italy have been attempting to find evidence for this suggestion, as one of the highest rates of coronavirus victims, it is essential that Italy discover as much as they can as quickly as possible. It is evident there has been a rise in Kawaskai disease since the COVID-19 outbreak, which suggests there is a parallel connection between the two. In Italy, Kawaski disease was common in one patient every three months, but numbers have risen and there are now ten cases each month. Dr Liz Whittaker expresses to the BBC “the fact that the syndrome was occurring in the middle of a pandemic, suggests the two are linked”.

Dr Lorenzo D’Antiga, a director of children health told the Guardian “Our study provides the first clear evidence of a link between Sars-CoV-2 infection and this inflammatory condition, and we hope it will help doctors around the world as we try to get to grips with this unknown virus”. As scientists discover research findings as we speak, the first evidence provided can hopefully help other scientists around the world have a starting point to the research that needs to be done.

However, as lockdown restrictions in many countries are looking to be lifted, scientists warn this discovery must be taken into account by government leadership. As schools are urged to be opened, this link between COVID-19 and the inflammatory disease could become amplified as children become in close contact with one another again. Despite the significance of this discovery, some scientists remind the public that this disorder is extremely rare therefore only a minority of children are expected to be affected by the disease.

If a child has the symptoms described it is essential treatment is undertaken quickly, to avoid any severe damage to a child’s health. It is extremely important to understand the consequences of COVID-19 in children, as some parents may be able to let their children see friends in the near future.

The cases of Kawaski disease are rising in young school children more than infants. It is still under debate that the illness is triggered by COVID-19. The UK were the first to see cases, now France and Spain are seeing cases of their own.

From the majority of reports written to date, the public have been told COVID-19 is effecting adults more significantly than children. However, the vulnerability of children means this new discovery is being closely monitored all across the world. As scientists are desperate to find out what the long term outcomes of the illness are. In the UK, cases of Kawaski disease have seemed to follow the curve therefore it may have reached its peak.

Scientists still need to find out more in depth information regarding this link, to ensure the safety and prevention of an illness that could affect children’s lives. The uncertainty continues into whether Kawaski disease can only affect children, therefore it is essential scientists discover evidence to provide countries with the most vital information.