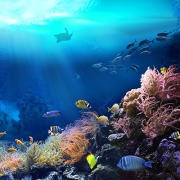 Technicolor coral once covered stretches of underwater reefs in the Florida Keys and beyond. But now, they are dying and researchers have likened them to abandoned underwater cities.

“Live coral reefs are what gives coral reefs that beautiful color. There’s lots of different blues and yellows and greens … the Keys specifically, our reefs have experienced a decline in coral cover starting as early as the 1970s, 1980s, and coral cover used to be about 25 percent. Now it’s as low as 2 percent in several sites,” Jessica Levy, the program manager at the Coral Restoration Foundation, said.

According to Secore International, a coral protection research group, more than half of the world’s coral reefs have died in the last 30 years due to coral bleaching, a process where coral polyps expel algae that live inside their tissues, therefore, bleaching it to a lifeless white color.

“Reefs globally are declining. We’re facing the decline of an entire ecosystem, which is completely unheard of,” she added. “We’ve never seen that before … I like to think of a coral reef without corals or without that coral cover as basically being an abandoned city eventually.”

Groups like the National Oceanic and Atmospheric Administration and the Coral Restoration Foundation are teaming up to save seven iconic reefs up and down the Florida Keys.

Technicolor coral once covered stretches of underwater reefs in the Florida Keys and beyond. But now, they are dying. Researchers are likening the reefs to abandoned underwater cities.

“We’re working with partners, with a lot of other groups, such as NOAA, The National Marine Sanctuary Program, Florida Keys National Sanctuary, The Nature Conservancy, Mote Marine Lab, Florida Fish and Wildlife Conservation Commission — lots of partners are coming together for this mission. The Mission Iconic Reefs is an extremely collaborative, holistic approach to reef restoration in the Florida Keys. It’s at a scale that’s unprecedented and this project itself is a first of its kind for us,” Levy said.

Groups like the National Oceanic and Atmospheric Administration and the Coral Restoration Foundation are teaming up to save these seven iconic reefs up and down the Florida Keys. Levy pointed out that the $100 million project will take about two decades to complete.

“Restoration is a very simple process,” she continued. “We grow critically endangered corals and offshore nurseries, and we raise these corals to a certain size and a certain age and then at that point, they range being moved from the nursery to a nearby reef site. So we’re essentially returning these corals back to their native habitat.”

Researchers in the Keys say healthy reefs do a number of things, like protect the area from storms, create a thriving tourism industry, and nurture marine life.

“Corals are like the trees. The trees provide habitat for the butterflies and the birds and mammals that live in that community, and so the corals do the same thing,” Andy Bruckner, a research coordinator at NOAA, said.

Tennessee Bill Would Require Students to Play Sports Based on Gender Identified...