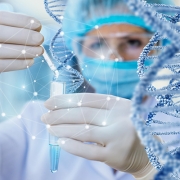 An unknown human ancestor has been unearthed accidentally following analysis of genomes from west African populations.

It is always interesting to consider where we came from and how our genetics have been influenced by our historic ancestors. Such research often presents fascinating insights into the past and in this case, has led to the identification of an entirely new population that we never knew existed.

The pioneering research was headed up by Sriram Sankararaman, a computational biologist from the University of California in Los Angeles. Scientists were originally analyzing genomes from west African populations to better understand their makeup and found that up to a fifth of their DNA seemed to come from a mysterious ‘ghost population’ of humans that lived in Africa about half a million years ago. They didn’t match with any previous records and appeared to be prevalent in much of the sample.

Whilst it is impossible to know for sure, the proposed theory is that tens of thousands of years ago, these ancestors mated with a not yet discovered population of other archaic humans, in the same way that Europeans mated with Neanderthals. Scientists are confident that Neanderthals and Denisovans are behind the genetic make-up of modern day man outside of Africa, but that ‘the contribution of archaic hominins to the genetic variation of present-day Africans remains poorly understood’. Previous research has indicated that other ancient humans may once have roamed Africa but up until this point, there was no DNA or fossil evidence to back this up or provide further insight.

This particular research involved the study of over 400 genomes from four west African populations from the areas of Nigeria, Sierra Leone and the Gambia. The scientists used a range of techniques to determine if the genes present were from interbreeding way back in the past. Their analysis confirmed in every case that this had certainly taken place. This revelation led them to explore further African genomes for more sections of DNA which looked different to modern human genes, as these were likely to have come from an ancient relative. These were compared with genes of Neanderthals and Denisovans to ensure they didn’t come from these groups, which they did not. This provided unequivocal evidence that they did indeed come from a currently unknown group of archaic humans. The presence in the genome makeup was also substantial, comprising up to 19% of their genetic ancestry in some cases.

Although much of the findings remain speculative, it is thought that this ‘ghost population’ split from the Homo sapiens between 360,000 and 1m years ago. The size of this population is estimated to be around 20,000 and they went on to mate with ancestors of modern west Africans at point over the last 124,000 years. Another theory is that there were several waves of mating over many thousands of years, rather than it all taking place during one specific period. There is also the very real likelihood that more different populations of currently unknown archaic human relatives emerging in the future, which would further complicate the picture.

What is particularly of interest to researchers is why certain aspects of this archaic human DNA was retained in modern genomes. We know that the process of evolution enables for stronger and more dominant or favourable genes to survive. There is clearly a reason why these specific aspects remained and some believe it might be because they helped the population to survive and breed.

Naturally, more questions present themselves as more knowledge is uncovered and it is natural to consider how this ancient population lived, what their conditions were and what their social and cultural interactions were like. We become incredibly inquisitive and we begin to wonder what life in general must have been like for them. Sadly the answers to these kinds of questions do not lie in DNA but in the archeological and fossil remains of the area. Unfortunately there are limited remains available to shed insight into this area, but who knows what may be revealed in the future.

The analysis of genes and our DNA enables us to create pioneering modern day treatments for some of the greatest challenges facing the human race, but it is always fascinating to see how science can help us to gain a greater insight into our origins. What is clear is that there are many pieces of the puzzle that are yet to be uncovered, but slowly and surely we are making process in uncovering yet more secrets about our past. The ability to analyze our genes and our DNA continues to develop and this means that in the future, we’ll be able to find out much more from the same genetic material that we have available right now. It’s exciting to wonder what secrets are staring us right in the face, we just do have the scientific expertise to decode them yet.