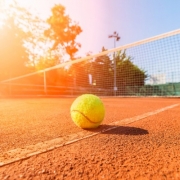 Serena Williams has lost the chance to compete for a record-equalling 24th Grand Slam singles title as she was shocked by Belarussian Victoria Azarenka in the semi-final of this year’s US Open.

Azarenka came back from 6-1 and 5-3 down to upset Williams, who struggled with an Achilles injury in the deciding set and was forced to wear heavy strapping as the 38-year-old pursued Margaret Court’s Grand Slam victory record.

Two-time Australian Open winner Azarenka will now face off with Naomi Osaka in the US Open final, the first Azarenka will feature in since taking maternity leave in 2017.

“I knew it wasn’t over at 5-3,” Azarenka said. “I’ve been there before. Today was going to be different. I was young, my ego was way too big. Now it’s a little smaller and the result’s coming.”

“I have been working on finding a calm mind and keep the body going,” the Belarussian said in an on-court interview. “She dug me in a big hole in the first set. I needed to find energy to climb out of the hole and it wasn’t easy.”

Azarenka has struggled for form since returning to the sport a few years ago and many had written her off as a major contender before victory on the same courts in the Western and Southern Open last month.

The unusually high number of mothers competing in this year’s edition of the US Open has been a talking point throughout and Azarenka has said she hopes she can inspire other mothers, and women in general, to aim high.

“Hopefully it inspires women to go after their dreams,” she said. “I feel like you can’t always identify yourself as just one thing. You have many things you can do in your life.

Williams made a strong start to the match and put pressure on the Azarenka serve, with the Belarussian making four double-faults in the first set and winning just six of 15 first-serve points.

Williams saw her opponent appear to grow increasingly frustrated in the first set, but Azarenka managed to compose herself quickly and came back fighting in the second. Serving quality increased massively into the second and as Williams struggled with injury in the third, Azarenka kept her foot on the gas and eventually sealed her place in the final with an ace.

“I started really strong,” said Williams. “Then she just kept fighting. She just changed and started playing better and better. Maybe I took a little too much off the gas pedal at some point. She played really well.

“It’s obviously disappointing. At the same time, I did what I could today. I feel like other times I’ve been close and I could have done better. Today I felt like I gave a lot.”

“She’s had a lot of, I would say, downs in her career. She started on a lot of highs.

“I don’t know how she stayed positive, to be honest. That’s a good lesson for all of us. No matter what, you just got to keep going. Hopefully she keeps living her dream.”

Elsewhere in the world of sport, Dallas Cowboys quarterback Dak Prescott has opened up about the struggles he has faced with mental health over the lockdown period and since the death of his brother this year.

“As I explained, it creates new emotions — emotions that I’ve never felt before but obviously dealt with,” he said. “And I obviously got the help that I needed and was very open about it. I think that’s why I was fortunate enough to get over it, as not all of us are.”

“If I wouldn’t have talked about those things to the people I did, I wouldn’t have realized my friends and a lot more people go through them — and they are as common as they are,” he said.

“I think that is important to be vulnerable, to be genuine and to be transparent,” he said. “That goes a long way when you are a leader and your voice is being heard by so many and you can inspire.”

Staying COVID-19 Safe When Socialising Inside Your Home