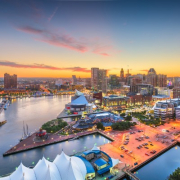 Known as the ‘Old Line State’, the ‘Free State’ and even ‘America in Miniature’ Maryland may not be at the top of everyone’s list of places to visit. However if you are a water lover this state is a must visit.

Home to the first railroad as well as the first umbrella factory, Maryland has over 10,460 square miles of land and water meaning it is home to virtually every natural feature – except the desert.

Nicknamed ‘The Old Line’ during the Revolutionary War – 400 soldiers from the First Maryland Regiment assisted General George Washington’s army to escape from a 10,000 strong British army – the state provided support to Washington via the Maryland Line, resulting in the nickname.

Meanwhile, the nickname of ‘Free State’ was awarded to Maryland in 1919 after Congress prohibited the sale and use of alcohol. Many of the state’s citizens were against this prohibition, stating it violated their rights, earning them the ‘Free State’ nickname as an example of their longstanding political freedom.

But what is there to do in Maryland? From water parks, beaches, boat trips and fishing experiences Maryland residents spend a lot of their time connected to the water.

The state has nearly 50 bodies of water including creeks, rivers, streams, ponds and lakes. And of course there is the Atlantic Ocean. However the largest section of water is the famous Chesapeake Bay. This natural wonder – conceived by the impact of an object similar to an asteroid over 35 million years ago followed by the melting of glaciers – Chesapeake Bay is 200 miles long with widths ranging from 30 miles at the south of the Potomac River to a mere 2.8 miles above the Bay Bridge. The average depth is around 21 feet however there is a deep channel in the center, which goes down to 174 feet.

The area is a haven for nature lovers as well as many birds and animals head to the wetlands, beaches, marshes and waters. It is estimated that around one million waterfowl birds use Chesapeake as a stopover during their annual migration.

It is worth noting that the people who live along the bay are some of the most welcoming you will find in all of Maryland. The towns along the route differ from quiet relaxing areas to vibrant cities.

Made famous by the musical Hairspray as well as hard-hitting crime series The Wire, Baltimore has plenty of attractions on offer to its visitors. As well as civil war memorials and the amazing National Aquarium there is an exciting dining scene to be had.

Whether you are taking a stroll around Baltimore’s Farmers Market and Bazaar in Saratoga Street or exploring the multi-ethnic cuisines in Mt. Vernon there is something for every taste.

Maryland is also home to over 3,100 miles of shoreline meaning there is enough space for everyone to enjoy a socially distanced day at the beach. Many Marylanders head to Ocean City for that stereotypical summer day out. Trimpers is the oldest continuously family owned and operated amusement park in the world and is full of rides that will take you back to a day when the world seemed more carefree.

However if you are not a thrill seeker make your way to Calvert Cliffs State Park Beach. The natural bay is perfect for those who want to spend the day swimming, hiking or just relax on the sand. The sand beach stretches for a quarter of a mile and is the go-to place for fossil hunters. So far there have been over 600 different types of fossils discovered including megalodon shark teeth, which have been dated back to between 10 and 20 million years.

One of the state’s more historical beaches is Point Lookout State Park Beach that was once home to a Confederate prison camp during the Civil War. To commemorate its past there are several monuments as well as a museum in the peninsula. There has also been many stories of hauntings in the area.

If you have your children with you – or are just a big kid at heart – one of the state’s eight water parks should take your fancy. Hurricane Harbor is home to the Six Flags America water park while the Frontier Town OC Waterpark and Campground has attractions for all ages, including the water park, a western theme park and the High Ropes Adventure Park.

It is not only water that Maryland does well. The state has a plethora of arts and cultural activities including the Downtown Frederick Public Art Trail that highlights the city’s history as well as showcases the amazing talent of many ‘diverse and exquisite artwork’.

It is important to remember that the country is still struggling to contain the on-going Coronavirus pandemic so wherever you decide to visit in Maryland you need to check the destination’s website before visiting. Some attractions have limited hours and social distancing is encouraged throughout the state.

China and The UK’s Opposing Views on Vaccinating Their Population