Blog - Latest News
You are here: Home1 / Around The Web2 / Business3 / Starbucks’s Open-Bathroom Policy is Affecting its Business, Study... 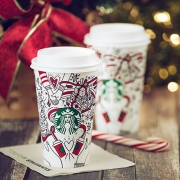 Starbucks opened its bathrooms to the public in May of 2018, part of an effort to counter accusations of racism after an incident at one of its Philadelphia cafes. More than a year later, a new study suggests the policy shift is having at least one effect: reducing customer visits compared with rivals.

Starbucks’s open-facility policy is an example of the challenges private companies can face when they offer public services, like bathrooms, according to the researchers, Umit Gurun of the University of Texas at Dallas and David Solomon of Boston College. The problem, they say, is that non-paying visitors can crowd out potential paying customers, hurting business.

To gauge the impact of Starbucks’s open-bathroom policy, the researchers examined anonymized cellphone location data from more than 10 million devices from January 2017 to October 2018, a span that covers a period before and after the change in the company’s rules. Then they compared the data to business at restaurants and cafes located near Starbucks shops to assess changes in customer traffic. visits. The upshot: Visits to Starbucks dipped 6.8% compared with rivals, the researchers said.

Starbucks dismisses the study, pointing to higher overall sales at its U.S. locations.

Autonomous Vehicle Technology Will Change The Inside Of Cars

Luxury Hoodies and Unmissable Bottoms: 10 Looks that Defined the Decade
Scroll to top