Blog - Latest News
You are here: Home / Around The Web / Science / Startup Developing ‘Digital’ Drugs To Boost US Troops In S... 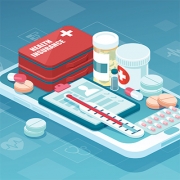 The company, AeBeZe Labs, is just three years old. In traditional startup fashion, it is based in Palo Alto, California, and has fewer than 10 people. The founder, Michael Moskowitz, is an entrepreneur who previously held positions at eBay and IDEO.

The company’s app, Moodrise, provides a glimpse into how troops might be monitored for anxiety and depression in space, and the most harmful effects of mental illness staved off. The app uses slideshows of different videos, mined from the internet, to target specific neurotransmitters associated with mood. The app is intuitive to use and the videos well selected but whether it can produce a mood shift is difficult to quantify and likely depends on the user.

The phenomenon of technology addiction is proof that digital images release certain neurotransmitters in our brains. AeBeZe Labs thinks it can leverage this to improve mental health in a low-cost and accessible way. AeBeZe has already developed interfaces for smart watches, home devices, and phones.

The technology keeps a record of the user’s emotional changes throughout the day, and, according to AeBeZe’s patent, will eventually be able to mine text messages and facial expression — using a built-in-camera — for emotional content. The patent also includes the potential to “push” emotionally coded content to the user throughout the day, which can be easily imagined in outer space.

In the recent film “Ad Astra,” the astronaut played by Brad Pitt is continuously subject to psychological monitoring via an AI interface, and uses a “comfort room” filled with screens playing videos designed to improve his mood. The videos include birds flying and bees pollinating flowers, meant to generate calm feelings. On the Moodrise app, the therapy would be described as releasing the GABA neurotransmitter, which reduces the activity of neurons and likely reduces feelings of anxiety and fear.

The market for direct-to-consumer mental-health technology has proved viable through apps such as Headspace and Calm, but Moskowitz’s bet is on providing digital-therapy technology to large organizations interested in institutional health, such as the US military and its newly created Space Force.

The renewal of the Air Force contract shows the military is listening. The first contract with the Air Force was worth $41,094 and the second $749,136. Strategies for improving mental health are desperately desired, and significant investments are being made in digital-health technology. The Department of Veterans Affairs has already begun expanding telehealth, or medical assistance delivered remotely through technology, to improve the quality of service. In fact, Moskowitz was clued into the military applications of this technology in 2016 from a former Air Force officer.

“You don’t have cigarette breaks anymore,” Moskowitz says. “We need a new way for servicemen and women to cope with stressors of the job.”