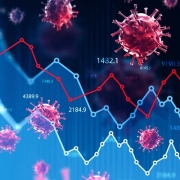 Stock markets around the globe were on the fall last week as tensions between economic powerhouses China and the United States continued to rise to new levels as more evidence continues to emerge that the US economy is struggling to recover from the effects of the coronavirus pandemic.

Markets in both Hong Kong and mainland China decreased sharply into the close of play on Friday. Uncertainty persists in markets throughout the world as the US and China traded blows politically. First, US authorities forced the Chinese consulate in Houston to close and cease operations before the Chinese government retaliated and ordered that the US do the same with its consulate in the city of Chengdu.

“The current situation between China and the United States is something China does not want to see, and the responsibility rests entirely with the United States,” the Chinese foreign ministry said in a statement. “We once again urge the US to immediately revoke the erroneous decision to create necessary conditions for the return of bilateral relations to normal.”

The ministry also added that the US had “unilaterally provoked the incident” by ordering the closure of the Houston office, an action Beijing said “seriously violated international law and the basic norms of international relations.”

At the close of play on Friday, the Shanghai Composite Index (SHCOMP) was down by almost 4% and similarly Hong Kong’s Hang Seng (HSI) felt a decrease of more than 2%. Markets throughout Asia were already struggling before China’s demand that the US shuts its consulate was announced.

A resurgence on Wall Street was heralded by many as the US started to reopen its economy following the lockdown period of the coronavirus pandemic. As case numbers continue to rise in the country, however, market momentum has slowed right down and rising tension in the feud between the US and China has meant that this is expected to be one of the worst earnings seasons in history for investors.

Additionally, the US department of Labor reported on Thursday an increase in first-time claims for unemployment benefits for the first time in around four months in further evidence that the US economy is once again slowing down considerably.

To add to the bleak outbreak, airline traffic across the country is decreasing once again, while restaurant reservations are slowing and some leisure venues, such as movie theatres, remain shut.

Just like the Asian markets, European stocks fell sharply on Thursday and Friday last week in reaction to the disappointing showing in Asia and the uncertainty surrounding Wall Street markets. Germany’s DAX (DAX) fell by more than 2%, as did France’s CAC 40 (CAC40). In the UK, the FTSE 100 (UKX) fell at similar levels, ending the day’s trading with a decrease of 1.7%.

In the US, futures for the Dow (INDU), S&P 500 (SPX) and Nasdaq (COMP) all fell by a minimum of 0.8% each as Wall Street suffered similar blows to the rest of the world’s markets. The Nasdaq Stock Market futures fell by 1.5%.

The biggest losers, however, seemed to be the tech stocks in Asia as markets fell considerably. Shares of Tencent (TCEHY) and Alibaba (BABA), listed in Hong Kong, fell by 5.8% and 3.6%, respectively. Additionally, the Star50 Index, tracking tech stocks that are listed on Shanghai’s Nasdaq-like Star Market, fell by a whopping 7%.

“Technology stocks might wind up absorbing a significant chunk of the impact, especially if the White House stops giving US corporate a free pass in their dealings with China,” said Stephen Innes, global chief market strategist at AxiCorp. The strategist also added that US tech giants in particular could struggle as US-China tensions escalate.

“Things could turn quite ugly into the weekend as traders will have no option but [to] pare risk,” he added.
“We just had a report literally as I walked in, that we set an all-time record on housing, price increases are up. I think they said 21%, which is a record that’s never happened before. That’s a great sign. We have an economy that’s going to be booming,” President Donald Trump told reporters during his latest White House coronavirus briefing.

“A lot of jobs are being produced. The job numbers will be coming out shortly, meaning over the next week or so. And I think it’ll be a continuation of the last two months. The last two months have been incredible. So I think we’re going to have a great economy. You’re going to have a fantastic next year,” the President added, ignoring recent downturns in stock markets in the US and across the world to shed positive light on the economical situation.