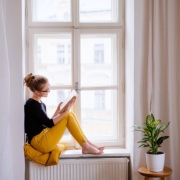 A New York Times Bestseller, Oprah’s Book Club Pick and named one of the best books of the year by various publications, Ta-Nehisi Coates’ highly decorated novel, The Water Dancer, will now be made into a film with Oprah Winfrey and Brad Pitt at the helm of production. The Hollywood Reporter describes the story as: ‘set in the pre-Civil War South, the story follows Hiram Walker, born into bondage. He possesses amazing photographic memory but has no memory of his mother. A carriage accident reveals to him a superpower called conduction, an ability to travel large distances and that is triggered by powerful memories of his mother. As he struggles to gain an understanding of this power, he becomes involved with the Underground Railroad and meets historical figures.’

Oprah Winfrey’s production company, Harpo Films, which produced acclaimed works such as Selma, will team up with Brad Pitt’s Oscar winning production label, Plan B. Plan B Entertainment produced Oscar picture winners, “The Departed,” “12 Years a Slave,” and “Moonlight”. The team will be producing alongside award-winning director and executive producer of the Apollo Theater, Kamilah Forbes. The film will be produced for MGM Studios.

Author Ta-Nehisi Coates’ said on the adaptation: “I’m honored to be working with Harpo, Plan B and my old friend Kamilah Forbes. We all believe that MGM is the best home for this adaptation and look forward to bringing it to life.” Coates has written the script for The Water Dancer’s upcoming film adaptation.

Kamilah Forbes is already familiar with Coates’ repertoire, having developed and directed the theatrical adaptation of Between the World and Me – a powerful non-fiction piece in the form of a letter to Coate’s teenage son, on the realities, symbolism and feelings associated with being a Black in America whilst exploring and critiquing the long history of racist violence in the United States. Forbes also has directed an upcoming HBO special which will combine elements of Apollo’s production, readings from Coates’ book, and incorporating documentary footage from the authors life, archival footage and animation.

The Water Dancer was originally published in 2019, and was an Oprah Winfrey Book Club pick, the blurb reads:

‘Young Hiram Walker was born into bondage. When his mother was sold away, Hiram was robbed of all memory of her—but was gifted with a mysterious power. Years later, when Hiram almost drowns in a river, that same power saves his life. This brush with death births an urgency in Hiram and a daring scheme: to escape from the only home he’s ever known.

So begins an unexpected journey that takes Hiram from the corrupt grandeur of Virginia’s proud plantations to desperate guerrilla cells in the wilderness, from the coffin of the Deep South to dangerously idealistic movements in the North. Even as he’s enlisted in the underground war between slavers and the enslaved, Hiram’s resolve to rescue the family he left behind endures.

This is the dramatic story of an atrocity inflicted on generations of women, men, and children—the violent and capricious separation of families—and the war they waged to simply make lives with the people they loved. Written by one of today’s most exciting thinkers and writers, The Water Dancer is a propulsive, transcendent work that restores the humanity of those from whom everything was stolen.’

In a statement on the adaptation which was announced in early November, Pamela Abdy, MGM’s film group president and Michael De Luca, film group chairman said: “Ta-Nehisi’s debut fiction novel has at its heart, a beautiful character in Hiram Walker, whose personal odyssey weaves the supernatural and spiritual, with the terrible reality of the forced separations endured by enslaved people and their families for centuries. Hiram’s story is one of devotion to those he loves, and the journey he takes to bring them together. All of us at MGM are incredibly honored to join Ta-Nehisi, Kamilah, Plan B and Harpo Films in bringing this film to the screen.”

Ta-Nehisi Coates is an acclaimed author and journalist whose work has spent over 100 weeks on the New York Times best-seller list. He is a national correspondent for The Atlantic, where he writes about culture, politics and social issues, but he has also worked for publications such as TIME, New York Times Magazine, The Washington Post. He also has written for Marvel Comics series’ Black Panther and Captain America. His best-selling books include We Were Eight Years in Power, and Between The World and Me, which won the National Book Award in 2015.

How To Effectively Give Space in a Relationship

What Do Scientists Need To Know About The Pfizer Vaccine Before it Can Be A...
Scroll to top