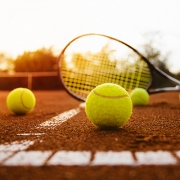 The sports community is steadily tackling the homophobic culture, but how much progress is being made in tennis?

In recent years, many people have praised the diversity which is apparent in tennis, particularly addressing the variety of cultures, countries and ages now embraced by the historic sport. There has also been much attention on women’s tennis in particular and positive work has been done to elevate the profiles of female players so that they are viewed equally to their male counterparts. But one area of diversity which is distinctly lacking is the lack of gay players and particularly male gay players. There have only every been two gay men playing at an elite level, and they both played several decades ago. More recently, American tennis player Brian Vahaly came out as gay, but it wasn’t until had been retired from the sport for over ten years and he admitted that he had made the conscious decision to keep quiet about his sexuality whilst playing professionally.

Thanks to players such as Martina Navratilova, there has been greater awareness of gay players within the sport, but it does appear to have been slightly more welcomed in the women’s game. For male gay players, there seems to be more resistance to coming out whilst in the sport, as there are undoubtedly existing players who have decided to keep their sexuality a secret.

On the one hand, this is understandable as there is no correlation between their sexual preferences and their abilities as a sportsman. It will not impact their performance on the pitch, their worthiness of a title, or the respect they will command from the public and fans of the sport. We don’t seem to question when a male player is married to a woman, or is in fact still single. On the flipside, people in positions of influence have the ability to change the way people view marginalized communities and can be positive champions of change. Coming out as openly gay would provide a role model for others who would then see that being gay isn’t an obstacle to achieving their dreams and their power could ensure that changes were made to make sport more accessible for the next generation of male players. Their bravery could set the wheels in motion for real and permanent changes.

The trouble is that whilst this argument is entirely valid, there is still a stigma attached to homosexuality in tennis. This is further reinforced by the continued presence of Margaret Court, a 24-time grand-slam winner who is openly homophobic and yet her name is still associated with the second-biggest arena at the Australian Open. There has been much resistance to this with open pleas from those within the industry and outside of it to remove her name, yet it remains. In fact, Martina Navratilova famously wrote an open letter in 2017 calling for Margaret Court Arena to be renamed Evonne Goolagong Arena, the name of another top Australian tennis player. Evonne Goolagong was a world renowned tennis player and is known for being one of the world’s leading players in the 1970s and 1980s. She was also the number one Australian pro on tour following the retirement of Margaret Court.

In her letter, Navratilova said, “It is now clear exactly who Court is: an amazing tennis player, and a racist and a homophobe. Her vitriol is not just an opinion. She is actively trying to keep LGBT people from getting equal rights (note to Court: we are human beings, too). She is demonising trans kids and trans adults everywhere.”

Whilst some may argue that simply removing the name of an arena will not change anything, it is what this name symbolizes that has the most power. It indicates that homophobia is acceptable in tennis, that it doesn’t warrant action and that important and respected people should not be held accountable for promoting hate against people based purely on their sexual preferences. It does not seem to reflect the values of an ever-progressive society and is a small, but incredibly significant hurdle in the advancement of a more inclusive and diverse sport.

Regardless of claims that the sport is making progress, the facts still speak for themselves. There have been no openly gay male players since the 1940s. This is all we need to see to know that more needs to be done to make tennis a sport which embraces players from all countries, cultures AND sexualities.

As world no.8 Kevin Anderson recently said in an interview with The Guardian newspaper, “Society historically has not been very welcoming. Times are changing because people are talking, which is great, but it will take somebody to break that trend. It won’t be easy. It will take a lot of courage. But hopefully if we can be more welcoming it might make it a little bit easier.”