You are here: Home1 / bahamas 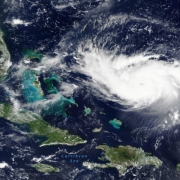 It’s been about a month since Hurricane Dorian devastated the Bahamas, Virgin Islands, Puerto Rico, Florida, and more southern states. These parts of the world are still recovering and have been left in complete disarray by the hurricane that only grew bigger and bigger before touching land. The storm reached a category 5 level, the highest it could be, making it one of 5 hurricanes to reach that level of severity within the past four hurricane seasons. Climate change and rising ocean temperatures are only further fueling the hurricanes; warm water temperatures add energy to the storms causing them to grow at substantial rates.

Wind speeds reached up to 225 miles per hour, and sustained that intensity for 24 hours in the Bahamas, making it the most powerful and prolonged hurricane to hit the Atlantic, according to the Union of Concerned Scientists in the USA (USCUSA). A majority of the Bahama Islands is 15 feet above sea level, Dorian was a storm that reached up to 23 feet above sea level, leaving a majority of the island completely submerged and destroyed, 60% of the island, to be more specific, was left underwater after the hurricane finally passed, also according to the USCUSA.

Now, four weeks after the tragic hurricane, the Bahamas are recovering, but at an extremely slow rate. Hundreds of people are still missing, most are presumed dead. Most of the island is still left without electricity or running water of any kind, and heavy machinery used to clear debris in only just arriving. Many parts of the island remain abandoned from the people who were able to flee the island before the storm and while aid teams and clean up crews are starting to work on the island more heavily, the recovery process is reminding many of Puerto Rico after Hurricane Maria, a storm their still recovering from.

An oyster bar in Florida, surprisingly, saw the devastation in their state first hand, and when they heard about the lack of financial backing for recovery teams all throughout the areas affected by Dorian, they knew something had to be done. The Oyster Bar is located in Siesta Keys, and over the years the bar has kept a novelty tradition alive that just might help the recovery process for the storm speed up.

The Siesta Key Oyster Bar has become a huge tourist attraction for its very creative decorating style. The staff encourages every customer who comes in to write or draw on a dollar bill and attach it to the walls and/or ceiling. In fact, the bar has been open for about 16 years, making its entire design aesthetic at this point nothing but colorful dollar bills hanging from every angle, at least that was the aesthetic.

After the owners saw the devastation that its state, and more importantly the Bahamas, has endured they knew they had to do something to help move the recovery process along. So the entire staff spent the whole past month removing all the beautifully decorated bills, which were heavily secured using a staple gun, so removal had to be a delicate process to avoid ripping.

Once word got out to Siesta Key locals on what the bar was doing, hundreds of patrons began coming into the bar and giving in $5’s, $20’s, even $100 bills. This week, the owner finally went to the bank to count up what they’ve collected, and to their surprise the total reached $14,000. According to ABC News, “Jill Pedigo, Beth Owen-Cipielewski and their husbands would take money off the walls and donate some of it to local charities. Hale said they once gave it to a safe house for battered women.” This time, they wrapped up the bills, placed them in a bin, and went straight to the Red Cross Foundation, most likely one of the most unique donations they’ve ever received.

“After we saw the videos and everything that came out of the Bahamas, it was unreal, and we all thought, what better reason to pay it forward? Honestly, I’m shocked, and I think the staff is shocked, I don’t think we ever expected it to amount [to] that much. Knowing it was such a lump sum of that magnitude is overwhelming.” Siesta Key Oyster Bar’s general manager Kristin Hale told ABC News. 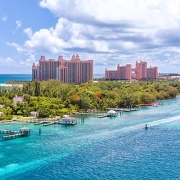 Hurricane Dorian was a disaster for the Bahamas, leaving at least 50 people dead, 2,500 registered as missing, and 17% of the island’s inhabitants rendered homeless as a result of property destruction. The category 5 hurricane was among the most powerful ever to hit the Caribbean on record, and the Prime Minister of the Bahamas noted that damage from the storm would be felt for generations to come. As a result of the damage wrought by the hurricane, many vacationers have cancelled their plans to travel to the island. But as the Bahamas are an archipelago consisting of 700 islands and cays, and only the Abaco and Grand Bahamas regions were hit, many of these cancellations were unwarranted. Officials in the tourism business report that tourism has decreased by half since the hurricane, and many government officials are stating that the best way to help the country is by visiting and spending money, as tourism makes up 60% of the nation’s economy.

While Grand Bahama and Abaco were the second and third most visited islands of the Bahamas, and those two islands will be out of commission as tourist destinations for the foreseeable future, the majority of the major travel destinations in the country were totally unaffected, contrary to popular assumptions. The major tourism center at Paradise Island and the ports for cruise ships, for instance, remain totally intact, and communicating that fact is proving to be a challenge for the tourism industry, as cable news and Internet stories are dominated by images of total destruction in the Grand Bahamas and Abacos islands. The Bahamas spans 100,000 square miles of water, and while the size of the hurricane was massive, it only affected a small portion of the overall land mass of the country.

In an effort to court travelers, businesses offering tourist attractions such as fishing expeditions have offered discounts and attempted to spread the word that they were still open on social media. The official Instagram account of the Bahamas Ministry of Tourism and Aviation, visitthebahamas, posted a picture of a map with all of the islands unaffected by the hurricane highlighted in yellow, accompanied by the text “You’ve shown us great love. We’re so grateful, we’d like to return the favor. 14 islands welcome you with open arms,” and the caption “The last few days have reminded us that together, we’re stronger. Let us return the love you’ve shown us by welcoming you the only way we know how — with open arms.”

Because of the importance of tourism to the economy of the Bahamas, officials are hoping that the islands that were untouched can function as a lifeline to help support the economy of the country overall. While the best way to support the hurricane relief effort is to donate money or goods or to volunteer, tourism in the Bahamas is expected to be another essential element of the country’s recovery. These islands, including Harbour Island, Eleuthera, and Bimini offer cruise ports, resorts, hotels, and beaches, and remain open for business. Officials have urged travelers with plans to visit unaffected islands to keep their reservations, and suggested that travellers who had plans to visit Grand Bahamas and Abacos reschedule their plans to visit the other islands instead.

Though the cruise ship industry has had a rocky relationship with the government of the Bahamas at times, Carnival and Royal Caribbean have committed resources to rebuilding the affected islands. The country has a message to send to the rest of the world that can be difficult to communicate: while the government doesn’t want to trivialize or marginalize the extent of the damage to property and human life wrought by the storm, they also don’t want to send the message that the Bahamas are a dangerous or unappealing place to visit for leisure. While Dorian has been more destructive than previous hurricanes, the country tends to see a decline in tourism in the aftermath of these weather events, which usually returns to a normal rate within two years.