You are here: Home1 / balance 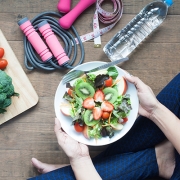 It is a well known fact that the healthier you are, the happier you are, and therefore your lifestyle choices can make significant impacts on your overall health. As the saying goes, you are what you eat. But did you know you are also what you drink, what you do, as well as how you behave?

Recent studies have shown that the lifestyle choices we make today can have some of the biggest impacts on not only our health, but our durability too, with some of our lesser healthier choices causing between 80-90% of all chronic diseases.

While we have been aware for some time that the lifestyle choices we make, including our diet and how much we eat either healthy or unhealthy , as well as vices such as smoking, alcohol and taking drugs, it is now thought that genetics may also have a massive impact on our health. Our age and where we live in the world can also play a major part.

Illnesses such as heart disease, obesity or diabetes have genetic components, however these genes can be altered by our lifestyle choices, which include the chemicals our bodies create when we meditate or exercise, or the nutrients from the food we eat.

For the last fifteen years Dan Buettner has been studying and identifying some of the world’s oldest living people in a program alongside the National Geographic Society. Ten years ago they discovered five areas around the world, called Blue Zones, where the residents were leading more active lives well into their later years, as well as having an increased chance of living to 100 years old, 10 times more than that of an average American.

Their in-depth research discovered that the lifestyle choices by those in these areas, rather than genetics, had given them such advantages. Factors included having a point to their lives, being able to take time to relax or meditate, taking time out of their busy lives, maintaining natural movement, not eating as much meat in their diets as some people in other countries, and maintaining a good support system of friends, family, and in some cases faith.

The only American location to be identified as a Blue Zone was the Seventh Day Adventists of Loma Linda in California, who are more aware of their overall health than the typical American. Most residents in the area do not drink alcohol, smoke tobacco or take drugs, they eat healthier, with many on a vegetarian or vegan diet, and exercise more. Most Adventist women, on average, live over six years longer than non-Adventists, while Adventist men seem to live around ten years longer.

Lifelong diseases were also reduced, with the risk of cardiovascular disease seeing a reduction of 50%, cancer was reduced by 30% and diabetes saw a reduction of around 80%.

The European Prospective Investigation of Cancer and Nutrition (EPIC) recently studied over 500,000 Europeans in 10 separate countries and also came to the same conclusion announcing that chronic diseases had a much lower rate in areas where residents opted to make healthier choices.

In fact, in Germany they looked at four specific lifestyle factors; exercising around 150 minutes each week, maintaining a healthy diet, being non-smokers, and managing to keep their body mass index (BMI) below 30.

The study participants were required to keep to the four factors for research purposes for four years and saw their mortality rate reduced by 40%, their chances of developing diabetes reduced by 91%, a 36% reduction in cancer rates and a 62% drop in heart diseases.

It was also anticipated that those maintaining all four of the factors would live around 14 years longer than someone who only managed to continue working with one of the four factors.

While lifestyle medicine has been proved to be a good approach to not only prevent and treat chronic disease, it has also been proven to reverse it.

However there are six ways that you could take back control of your own health, as discovered by The American College of Lifestyle Medicine. By concentrating on having healthy and happy relationships and a good support system, maintaining good quality sleep routines, eating a plant based, whole food diet, embarking on a physical activity regime, reducing your tobacco intake as well as managing your stress you should be able to maintain a healthy and happy lifestyle.

Whether you live in one of the five Blue Zones around the world or not, you can still ensure you have a happier and healthier life. Start by taking control of your life and knowing what you should be doing to make yourself healthier and you can not only live a longer, healthier life but you can also reduce chronic illnesses.