You are here: Home1 / barcelona 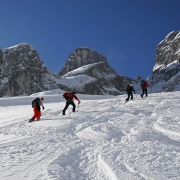 When Audrey Mash arrived at a Spanish hospital, she was cold to the touch, it had been hours since her last heartbeat, and her husband was convinced she had died. The British hiker had fallen victim to hypothermia during a hike in a cold, mountainous area after she was caught in a snowstorm. Initially, she had trouble speaking and moving before falling unconscious; her husband could not feel a pulse or her breath, and feared she had died while waiting beside her for several hours before emergency services arrived. When she was taken to the hospital, her body temperature was only 64.4 degrees, and doctors feared she would not survive, and even if she did, she would have severe neurological damage after being cut off from oxygen for so long. However, the hypothermia that almost killed her also ended up saving her life, as the cold temperature preserved her body, preventing her brain from deteriorating during this frightening period. Thanks to cutting-edge medical technology and the expertise of her medical staff, Mash made a nearly-full recovery, with only lingering numbness and tingling in her fingers due to nerve damage and amazingly, no brain damage.

At the Vall ‘Hebron Hospital in Barcelona, Mash had turned blue and had no vital signs, as doctors worked to revive her despite their fears that she would die. However, the medical team, lead by Dr. Argudo, believed that Mash’s body would be preserved by the extreme cold, and used a specialized tool to bring her back to life. The tool is called an extracorporeal membrane oxygenation machine, and takes a patient’s blood, infuses it with oxygen and controls its temperature, and reintroduces the blood to the body. Normally, this tool is used on infants who have breathing or heart problems, and it had never before been used in a patient who was in Ms. Mash’s condition. Indeed, Ms. Mash’s case was perhaps the first time in history that a person had been revived after suffering cardiac arrest for six hours.

The doctors used the machine to slowly increase the temperature of Ms. Mash’s body, as all of her blood went through the cutting-edge tool. After her body temperature was raised sufficiently, the team used a defibrillator to restart her heart, advising her husband that there was a real chance she would suffer major brain damage as a result of the accident. However, these fears were alleviated two days later, after Ms. Mash was brought back into consciousness and started speaking with doctors. After she woke up, she immediately asked the doctors, “What am I doing here? Who are you?” which served as a positive sign as it showed that the patient had a strong presence of mind and awareness of her surroundings. Ms. Mash was kept in the hospital for 12 days, after which she returned to her husband, who was shocked and traumatized by the ordeal.

Ms. Mash has no memory of the incident, and the last thing she remembers before waking up in the hospital is departing on the hike with her husband. As such, Ms. Mash has said during interviews that she was not emotionally affected by the near-death experience, and she has said that the ordeal had a greater psychological impact on the people around her, most significantly her husband and her parents, than it had on her. Ms. Mash plans on returning to work soon, as she is an English-language teacher in Barcelona. Ms. Mash, an avid fan of hiking, plans to continue her active lifestyle, and intends on going for a run before returning to work. In fact, doctors believe that Ms. Mash’s active lifestyle was an instrumental factor in her successful recovery, as her body is very healthy and thus able to recover from traumatic experiences more effectively. Ms. Mash wants to resume hiking again in due time, but notes that she will likely wait until the weather is warm before doing so.