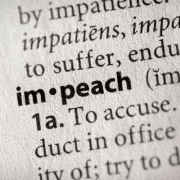 Devin J. Stone is a practicing lawyer whose YouTube channel looks at various elements in popular culture from the perspective of the law. In his latest video, he examined the arguments that have been presented in the trial so far, which includes those expressed by impeachment managers from the House of Representatives, led by Intelligence Committee Adam Schiff, that the president abused his office by soliciting campaign interference from Ukraine and obstructed Congress by trying to cover up their investigation into his alleged wrongdoing. In the video, Stone accuses the Republicans of arguing contradictory points; that it’s simultaneously too late and too early to call witnesses in the trial, and also that the Democrats should wait for the courts to decide whether White House officials are allowed to ignore congressional subpoenas and that the courts have no right to decide this type of question.

Republicans voted along strict party lines to block 11 amendments proposed by Minority Leader Chuck Schumer that would have ensured witnesses be called during the trial and additional subpoenas issued, but also complained that Democrats presented nothing new at the trial, as if they weren’t directly responsible for that being the case. Stone also commented on the marathon nature of the proceedings, as arguments were heard for hours on end and went long into the night, which is likely to fatigue both the senators trying the case and the American people, likely an intentional move on the Republicans’ part, as they were the party who set the rules for the impeachment trial and also the party most interested in preventing the facts about the case from becoming known among the general public.

Stone also observed the various ways the impeachment of Trump differs from the impeachments of past presidents, most notably how the investigation of Trump was by necessity conducted by Democrats instead of by an independent counsel, and that the investigation was not exhaustively concluded before the articles of impeachment were sent to the Senate. As Attorney General William Barr was unwilling to appoint an independent counsel to investigate Trump, Democrats had to do it themselves, raising separation-of-powers questions and potentially causing legal problems for the Democrats later on.

Additionally, Stone also discussed the theory floating around the Internet that Chief Justice John Roberts can intervene more heavily in the trial, forcing witnesses to be called and documents to be produced. As expected, however, Roberts intervened very little in the trial, with his only extemporaneous comment being an admonishment of the hostile tone of both the prosecution and the defense during the first day of the trial. Stone said that he expected Roberts to do more of the same, fading into the background as arguments were heard, as presiding justices in past impeachment trials have taken a similarly passive role and “both sides-ing” the issues.

Finally, Stone pointed out the ridiculousness of the fact that Trump, in Davos, commenting about how the fact that the administration withheld evidence from the trial gives him an advantage in the trial, seemingly bragging about his obstruction of congress, one of the offenses he was impeached for. Truly, we live in interesting times. 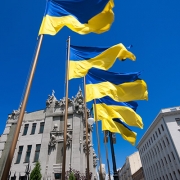 One of the central figures that has emerged in the Ukraine scandal that led to the president’s impeachment is Lev Parnas, an associate of Rudy Giuliani, the president’s personal lawyer. Parnas was indicted on federal charges several weeks ago and has since indicated that he is willing to cooperate with Congress’s investigation into allegations that Trump improperly pressured the president of Ukraine to announce an investigation of his political opponent, Joe Biden. On the eve of the House’s transmission of articles of impeachment to the Senate, Parnas sat down with MSNBC’s Rachel Maddow to discuss documentary evidence that he had produced, including handwritten notes describing the scheme to coerce President Zelensky into announcing an investigation into the Bidens.

Parnas’s interview signalled a break from the Trump administration, as he directly blamed several key White House figures, including the attorney general and the vice president, for their culpability in the scheme. While Parnas’s claims have not yet been fully vetted, they corroborate much of the testimony provided by other witnesses who participated in the House’s investigation. Most prominently, Parnas reiterated Gordon Sondland’s claim that “everyone was in the loop;” in other words, according to witnesses, all of the senior Trump administration officials were aware of the scheme as it was being carried out.

In addition to providing circumstantial evidence corroborating the narrative that has emerged about the president’s involvement in the extortion plot, Parnas also provided previously-undisclosed evidence, further illuminating the roles of individuals connected with the two governments in attempting to carry out the plan. Parnas, by his own account, personally worked with Rudy Giuliani and others to oust former US ambassador Marie Yovanovitch, who was perceived as interfering in the administration’s scheme.

Parnas also communicated with a new character in the Ukraine story, Robert Hyde, a controversial Republican congressional candidate who was not publicly known to be connected with the scandal before Parnas’s release of text messages and other documents. Hyde, by Parnas’s account, was “always drunk,” and as such Parnas often did not take his text messages seriously. Nevertheless, Hyde’s recently-revealed correspondence with Parnas drew significant media attention as his texts appeared to include personal threats against the ambassador, who seemed to be under surveillance by suspicious figures. Accordingly, and in an ironic twist, Ukraine has opened an investigation into the alleged surveillance of and threats against the American ambassador, potentially paving the way for the release of further evidence about the scandal down the road.

According to Parnas, essentially all of the highest-ranking members of the Trump administration as well as other government officials were aware of and at least complicit in the scheme, specifically including the president’s personal lawyer Rudy Giuliani, Vice President Pence, U.S. Representative Devin Nunes, and Attorney General William Barr. According to Parnas, Pence’s trip to Ukraine was canceled as a direct result of Zelensky’s delay in announcing an investigation into the Bidens, Nunes personally knew Parnas despite his claims that they didn’t know each other and was involved in efforts to produce documents denigrating Biden, and Barr must have known about everything that was happening but chose not to do anything about it, despite his position as the head of the Department of Justice. By Parnas’s account, Guiliani definitely had a direct role in carrying out the scheme whereas the other government officials participated in a supporting capacity.

While Parnas’s claims are explosive, it’s important to keep in mind that not all of them have been fully vetted, and although Parnas produced documents that support some of his claims, some of what he said may be untrue. Though he pled “not guilty” to largely-unrelated federal charges issued last year, Parnas may be lying in order to diminish the appearance of his own culpability in committing illegal acts, or he may be lying for reasons unknown to the general public. While Parnas’s character and his testimony can reasonably be called into question, the voluminous documentation he made publicly available reveals a near-incontrovertible paper trail that strongly supports the general narrative of the administration’s involvement in a corrupt extortion scheme carried out to compromise an American election.