You are here: Home1 / bee population 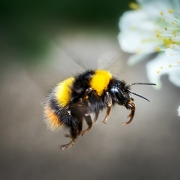 Climate change has inflicted its fair share of damage on the planet within the past decade. It’s no surprise that the complete destruction of millions of acres of our natural world has led to a massive increase in endangerment and extinction rates for the species living within those habitats. Just recently over one billion animals fell victim to the devastating bushfires that have been blazing throughout Australia for over three months.

Obviously, rebuilding what has been lost, and repopulating species that are dwindling in size are top priority for many scientists/environmentalists. One of the biggest concerns comes from the major loss of bumblebee’s throughout North America and Europe specifically. In fact, the likelihood of finding a bumblebee in their traditional habitats within those two continents has declined by a third since the 1970’s.

Rising global temperatures are causing more species of bumblebee to move further north in both North America and Europe. Bumblebee’s are an obviously essential part of the food chain, as their work benefits all species on Earth. They’re responsible for pollinating fruits, vegetables, and wild plant life that feeds millions of other types of animals and insects. Without their pollination, a myriad of plant species that we use for food will die off, adding even more pressure on scientists who are already trying to combat the world’s growing food shortage issue.

“There had been some previous research showing that bumblebee distributions are moving northwards in Europe and North America, as you’d expect with climate change. But this was the first time that we have been able to really tie local extinctions and colonizations of bumble bees to climate change, showing a really clear fingerprint of climate change in the declines that we’ve seen,” Dr. Tim Newbold of University College London (UCL) stated.

Global warming, habitat loss, disease, and strong pesticides are the main culprit when it comes to the considerable decline in both range and abundance of bumblebees. There are approximately 250 different species of bumblebees. Researchers and conservationists have done extensive studies of bumblebee population rates. In fact, in a study that specifically looked at more than half a million records of 66 bumblebee species from the 20th century, as well as from the years 2000 to 2014, researchers found that the greatest decrease in population size occurred between the latter years.

This isn’t surprising; while climate change has always been an issue, it’s devastating effects have sizeably increased within the 21st century thanks to advances in technology and industrialization. As previously stated, the likelihood of a normal habitat being occupied by bumblebees has dropped 30% more than what the rate was between 1901-1974 (according to the records that were studied).

Since bees are moving further north, in an attempt to move away from the extremely warm weather that has only gotten worse as the years have gone by, the southern areas of both North America and Europe have suffered the greatest loss. These migration patterns do mean that the bees aren’t dying, just inhabiting newer areas, which may seem like a silver lining, however, their survival in more northern areas of the world doesn’t compensate for the loss that the southern areas are enduring.

“Measures such as increasing the margins and buffer strips around agricultural fields that are rich in flowers and wildlife and the preservation of grasslands are deemed effective tools in alleviating the rapid decline in bumblebee species. They can provide bees with forage and help underpin stable populations of pollinators, whose survival is crucial for European food security,” wrote the International Union for Conservation of Nature.

While systematic change is really the only way the planet can reach a turning point in terms of climate change, there are still things we can do at home to at least help our local bumblebees from facing mass extinction. Planting flowers, vegetables and any other type of vegetation in our outdoor living spaces will attract these friendly bees to come and get to work. Remember, bumblebees typically never sting, especially when they’re just left alone, so set out some plants to pollinate and help the world become a little greener, even if it is just in your backyard.