You are here: Home1 / best diets 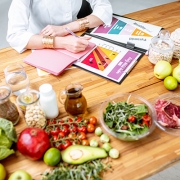 It’s 2020: a new year, new decade, and a new opportunity to improve on your own life with some New Year’s resolutions. One of the most common resolutions to date is to eat healthier and exercise more. Leading a healthier lifestyle in general is always a great goal to have, but it can be difficult to get organized and stay motivated enough to follow through with a schedule. However, following a specific diet and exercise regimen can be half the battle, as it’s all about finding what works best for you personally.

Every year the US News and World Report ranks the “best diets” to follow in the new year. This list is used by thousands of Americans to determine what will work best for their own personal goals and lives. This year, the Mediterranean diet took first place for the third year in a row as the “best diet” to follow.

“The hallmarks of a ‘best’ diet include balance, maintainability, palatability, family-friendliness, sustainability, along with healthfulness. The Mediterranean diet gets check-marks in all of those boxes,” said Dr. David Katz, who was one of 25 judges on the U.S. News and World Report panel, to CNN.

The Mediterranean diet emphasizes what most individuals looking to be healthier really want in a diet. The food is simple and fairly easy to make, and it promotes plant-based cooking. It also pulls the focus from eating things such as red meat, saturated fats, and artificial sugars. Within the US/World Report, the Mediterranean diet won first in four categories, including best diet for healthy eating and easiest diet to follow.

A major aspect to all of the top listed diets involves the practicality of each plan. For example, the Mediterranean diet doesn’t specifically state all the things you are no longer allowed to eat, but instead tells you how you can enjoy those things in moderation (some more than others).

Right under the Mediterranean diet is the DASH diet. Individuals who have been using the DASH diet have been involved in multiple studies regarding the long term health benefits the diet offers. Specifically, this diet helps to lower blood pressure and prevent future heart issues that one could develop (heart disease is the number one killer in the world). This diet also promotes that you eat more natural foods, like fruits and veggies, and avoid anything with high levels of fat and salt. The fact that so many studies have been conducted on this diet in particular is the reason it holds the second spot on the list.

“We’re interested in diets that have proven staying value — not fad diets that are here today, gone tomorrow. The diets that perform well are safe, sensible and backed by sound science. That’s going to be consistent from year to year,” said Angela Haupt, managing editor of health at U.S. News & World Report.

The MIND diet and WW (formerly known as Weight Watchers) take the other two top spots on the list. The MIND diet is a combination of the Mediterranean and DASH diet and is geared towards helping lower the risk of Alzheimer’s disease, or slow it down in those already experiencing symptoms. The acronym MIND literally stands for “Mediterranean-DASH Intervention for Neurodegenerative Delay.”

WW was fourth ranked, but also won first place in the US/World Report for “best weight loss” and “best commercial weight loss” programs. The food in the program has always been healthy, but the judges on the report really responded to the amount of support groups/offers it gives to the dieters using the WW plan.

Regardless of what plan you choose this year, always make sure you’re listening to your body. Don’t deny yourself certain pleasures because you want to look a certain way, but instead modify your current situation because you want to feel/be healthier. Start slow, do your research, ask a few friends, and check off your resolution goal by December 2020!