You are here: Home1 / beta-blocker 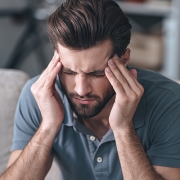 While headaches are a fairly common and benign occurrence, migraines are different as they cause a substantially greater degree of pain that can be difficult or impossible to ignore. If you or someone you know suffers from migraine, you know that migraines often cannot be treated with traditional pain medicine, and it may seem as though nothing can be done to reduce the suffering. Making matters worse, migraines are often accompanied by other symptoms including nausea and vomiting, and migraine sufferers can become hyper-sensitive to light and noise. As such, migraine sufferers often have difficulty meeting the demands of everyday life, as the condition can affect one’s ability to work, maintain relationships, and perform other normal everyday tasks. 47 million Americans suffer from migraines, and six million Americans have more than 15 headache days per month, severely limiting their ability to participate in normal life. As a result, migraine poses an economic burden on the country, as it results in employee absenteeism or employees who go to work but are unable to perform their duties effectively.

Oftentimes, as a result of stigma or a lack of appreciation for the severity of pain by others, migraine sufferers try to treat the problem on their own, usually with little or no success. Making matters worse, very few medical experts specialize in treating migraines, meaning that the care migraine sufferers receive from their primary care physicians can be insufficient. What’s more, people with intense migraines can end up in the emergency room, which is one of the worst places to be during a migraine episode as emergency rooms are full of bright lights, loud noises, and long wait times that can aggravate the condition.

Luckily for treatment-resistant migraine sufferers, new medicines and therapies are being developed that show promise in treating this debilitating condition. There are four drugs on the market, two of which are anti-seizure drugs and two of which are beta-blockers, that are approved by the Food and Drug Administration for treatment of migraine. Additionally, people whose migraines are frequent can receive Botox injections, which can help to prevent the onset of symptoms. There also now exist newer drugs called biologic drugs which are taken once a month or once every three months. These drugs are specifically designed to treat migraines by blocking receptors that transmit pain signals. Unfortunately, however, biologic drugs are expensive, and insurance companies are often unwilling to pay for them until other drugs are shown to be ineffective for treating the condition.

Another newly developed treatment for migraines does not involve the use of drugs at all, but instead works as a neurostimulator that transmits electrical pulses through the skin to reduce the experience of pain. The device, called the Nerivio Migra, works with a band that is placed on the upper arm and is controlled by the patient’s smartphone. This treatment is relatively inexpensive, costing around $99 for 12 applications. If you’re suffering from migraines, the important thing to keep in mind is that speaking with a doctor about migraine is much more effective than trying to treat the symptoms by yourself, and that if one migraine drug is ineffective, there are a number of other options to pursue that can help to alleviate pain. Given the impact that migraine can have on one’s productivity or quality-of-life, it is important to ignore the stigma of migraines and seek treatment instead of attempting to handle the problem on your own.