You are here: Home1 / biking 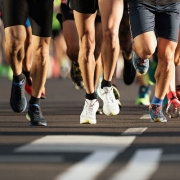 There are certainly aspects of physical exercise that many of us dread. Nearly everyone can sympathize with the impulse to instead lie down, watch TV, and eat junk food when faced with the prospect of getting our hearts pumping and body moving. The threat of injury is an ongoing concern, particularly for beginners or for those working with heavy weights, and the process of building muscle is tiresome and leads to soreness and pain. But despite these difficulties, the scientific consensus concerning the health benefits of regular physical activity, combined with healthy eating habits, is clear. Not only does exercise contribute to an improved mood and overall sense of well-being, but prolonged, intense cardiovascular activity can generate a burst of euphoria and optimism known colloquially as a “runner’s high.” Many long-distance runners find this experience to be so joyful as to become somewhat addictive; unlike most other addictions, however, chasing a runner’s high is generally understood to be a practice which has the side effect of improving other aspects of life as well.

While not everybody who runs reports experiencing a high from going a long distance, this phenomenon is frequent among runners who are particularly serious about committing themselves to the hobby. People who have have had a runner’s high describe experiencing an almost-magical sensation whereby all of their ordinary worries and even the physical stress of running seem to melt away, replaced by an overwhelming sensation of joy and accomplishment, with positive after-effects that can last throughout the day. Many runners who get high during their workout report feeling more energized, motivated, and focused in their ordinary lives afterwards, contradicting the popular belief that exercise leaves one feeling listless and exhausted.

To better understand how this effect emerges, it’s a good idea to take a look at the medical literature that has emerged concerning the subject. For several decades, understanding of the physical and chemical phenomena occurring in the brain during a runner’s high was only speculative, and there existed controversy over whether the effect was actually a myth or placebo. For a long time, it was thought that the runner’s high was a consequence of elevated endorphins in the circulatory system, but in studies where the effects of endorphins were blocked chemically, runners still reported the sensation in question. Other theories that attempt to explain the effect suggest that the hormones norepinephrine, serotonin, and dopamine play a contributing role, or that an increase in body temperature triggers a change in mood.

A groundbreaking 2015 study, however, presents evidence of a new theory that claims the effect of a runner’s high is in fact actually related to the brain’s endocannabinoid system, the same system that interacts with marijuana to produce the similar feelings of euphoria related to usage of the drug. The researchers theorize that, from an evolutionary point of view, the body releases a natural drug during sustained exercise to take the edge off of the pain of physical activity when chasing prey or escaping predators, both of which were necessary for survival during the vast majority of the species’ evolutionary history. Though the study in question used rodents as test subjects, the research likely explains the effect in humans as well, as all mammals share generally similar biological systems.

Scientists who study the runner’s high effect say that the keys to experiencing the phenomenon lie in experience and balance. As people generally experience a runner’s high after more than an hour into their run, it can take a while for a beginner to build up his or her endurance before being able to run for this length. Additionally, runners need to run fast enough to trigger the response in their endocannabinoid system, but not so fast that the brain’s self-preservation mechanisms trigger, which results in reduced blood flow and stimulation. This balance is called steady-state cardio, and occurs when the heart rate is elevated to the general range of 135-140 beats per minute.

Despite the name, however, a runner’s high can be experienced during any form of extended cardiovascular activity, which is good news for anyone looking to become proficient in swimming, bicycling, or any other form of fitness. As such, it perhaps may be more fitting to instead call the effect a “fitness high.” In any case, while the process of becoming sufficiently fit to experience this high can be grueling, setting a goal to do so can be an excellent motivational tool for those looking to incorporate a greater degree of healthfulness into their lives.