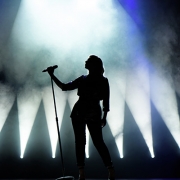 Billie Eilish has truly come into her own within the past year. Not only did she recently become the first artist since 1981 to win in all of the big four Grammy categories (best new artist, album of the year, record of the year, song of the year), she also is the youngest artist to do so at just 18-years-old. Her ethereal voice, production quality, and intense lyricism has given her a career larger than most artists could ever dream of. She’s never shied away from the fact that throughout it all, it’s just been her and her brother Finneas, who also won Grammys for his work in production, making music in their bedroom.

It seems as though Eilish really came into the scene and took over within a matter of minutes. Her rise to fame was just as fast as her mainstream chart success. Her entire family has also always been very much involved in the industry, so while it’s no surprise that she was able to find her way into the spotlight, it actually all happened by accident.

For some background, Eilish was born and raised in Los Angeles, California, the birthplace of most of America’s greatest entertainers. Her mother is Maggie Baird; a singer/songwriter as well as an actress. Her IMBd page credits her for co-writing and starring in the movie Life Inside Out, as well as voicing one of the characters in Mass Effect 2, a popular video game series.

Eilish’s father also has his fair share of Hollywood accolades. Patrick O’Connell was also in the movie Life Inside Out; along with Eilish’s older brother Finneas, they definitely made entering into the industry a family affair. O’Connell is also known for his roles in popular TV shows and movies such as Iron Man and The West Wing.

Eilish’s parents were in the industry, working behind the scenes as well, long before either Billie or Finneas were born; so when it came to creating a home environment that emphasized creativity and the arts, Patrick and Maggie knew exactly what they were doing. The two homeschooled both kids starting early on in their lives as a means of allowing their kids to explore the creative sides of themselves. It wasn’t long until Finneas and Billie realized that they were both musically inclined.

Eilish herself loved performance from a very young age due to her parents method of raising both her and her brother. One of their goals with homeschooling the kids was to make them both career-oriented but in a field that they were truly passionate about; and they were definitely successful in doing so.

At just 8-years-old Billie was already singing with her local choir and enrolled in multiple dance classes. Finneas, the now Grammy-winning songwriter and producer, was also already fully engaged with the behind the scenes aspects of music from an early age, creating the perfect recipe for success for the two siblings.

By the time she was 13, Eilish was recognized by all her creative-arts teachers as a talented force to be reckoned with. So much so that one of her dance teachers asked her to write a song for a choreographed dance performance. With the help of her brother Finneas, Eilish wrote the now insanely popular track, “Ocean Eyes.”

Once the two completed the track, they uploaded it to SoundCloud; a popular music-streaming site that most artists trying to make it upload their music too. Eilish uploaded the song onto the platform as an easy means to share it with her dance teacher, however, listeners had other plans, as the song went completely viral within its first 24 hours of being uploaded.

The rest is truly history for Eilish’s career. After her initial SoundCloud success, Eilish and her brother continued to upload a few tracks onto the platform, including other now-popular songs like ‘Six Feet Under’ and ‘B****es Broken Hearts.’ Soon after she was signing a record deal and releasing her first EP, ‘don’t smile at me.’

Although her career has already become one of the greatest success stories in the music industry, Eilish says it’s still just her and her brother making music together at home and hoping everyone likes it. Based off the last year alone, I think it’s safe to say this is just the beginning for both Billie and Finneas.