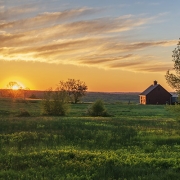 Fleming never actually owned the property itself, but was a long-term house guest on multiple occasions. The Black Hole Hollow Farm is listed as a historic farm on the border of New York and Vermont. The property itself is on a plot of land that’s over 400 acres big, and was owned in the 1950’s by Josephine Huntington Hartford Bryce, who at the time was the heir to the Great Atlantic and Pacific Tea Company. Bryce was married to John Felix Charles Ivar Bryce, who was also a British Intelligence Officer and close friend to Fleming, hence the multiple long-term visits.

According to the listing, the farm is “Nestled within a quiet valley, the farm is an idyllic landscape encompassing the White Creek, tiered ponds, open pastures and miles of wide private trails bordering a 5,000-acre forest preserve. At its center is an 18th-century farmhouse surrounded by picturesque English gardens.”

Fleming created the character of James Bond in 1953, and the story goes that he was spending an extended vacation at Black Hole Hollow Farm in search of inspiration for his novel when the idea originally came to him; little did he know it would inspire him to create one of the most iconic fictional spy characters of all time.

The listing states that Fleming mainly stayed in one of the guest quarters known as the “Yellow Room.” He often spent his time on the farm taking long hikes throughout the woods and hilly landscapes surrounding the property; an endless source of inspiration for the average writer. In regards to the property itself, Fleming once wrote that he “lived [there] like a king – an uninvited one – in fragrant and luxurious solitude.” Definitely a solid selling point for potential buyers.

Fleming published his first James Bond novel, Casino Royale, in 1953 and the instant success of the work motivated him to write 13 more Bond books; the remainder of his writing accolades include two non-fiction novels and the classic children’s book, Chitty Chitty Bang Bang, which like all the James Bond novels was later turned into a movie.

Fleming may have passed in 1961, but the Bond legacy that he’s left behind is still thriving as if he just released the first novel yesterday. In fact, for the first time in five years the world is finally getting another James Bond movie starring Daniel Craig titled No Time To Die; which will be Craig’s fifth and final movie installment playing the spy.

It’s difficult to say if Fleming knew how much of a success all of his work would have, however, in terms of inspiration he really was in the perfect setting. Additional perks of the Black Hole Hollow Farm include four barns on the property and a riding arena for any potential equestrian buyers. Horse-lovers should also note that the property itself is only 30 miles away from the Saratoga Race Course, which is famously known as the home of America’s oldest horse races, the Travers Stakes.

The listing also states that the property has “six bedrooms, elegant reception rooms with fireplaces, an office, dining room for large dinner parties and fully updated gourmet kitchen. Complementing the main house are four dwellings: the lodge and cottage, each with three bedrooms; the two-bedroom Federal House; and the Milk House, a one-bedroom home. Other amenities include a maple syrup production facility, a greenhouse with a koi pond, an outdoor swimming pool and three stocked ponds.”