You are here: Home1 / black holes 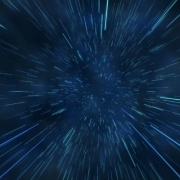 Wormholes have been a firm favourite in the land of science fiction for decades, but now, scientists are exploring the real possibility that wormholes do in fact exist. Their attention is directed specifically toward the Milky Way galaxy, which could hold the secrets to discovering one such portal.

Anyone who is a fan of sci-fi will appreciate the fascination with wormholes. In the 2014 movie Interstellar, a team of explorers travel through a wormhole in space in an attempt to ensure humanity’s survival. And for over 6 years in Star Trek Deep Space Nine, the Federation space station Deep Space Nine guarded the opening of a stable wormhole to the far side of the galaxy. All exciting stuff, but not steeped in reality.

The first discussions surrounding real wormholes emerged as part of Einstein’s theory of General Relativity and in its simplest terms, provides a shortcut between two far away points in space. Einstein’s theory supports the presence of wormholes as it allows for spacetime to curve, providing opportunities for time and space to bend and thus, manipulate the distance between the two points.

Wormholes have been at the heart of hypotheses by theoretical physicists since the 1930s, where they were initially called white holes. White holes are the exact opposite of black holes in that they emit energy but do not allow anything to enter. The name was eventually changed to ‘Einstein-Rosen bridges’, but as this wasn’t a particularly catchy name, they became better known as wormholes.

Sadly, proving such a theory has so far been beyond the means of scientists here on earth, and no such examples have been found in space. However, now researchers at New York’s University of Buffalo have indicated that the answer may lie within our own Milky Way.

Fresh attention has centered on Sagittarius A*, a huge black hole that is over four million times bigger than the sun.  Given its immense size, scientists have theorized that they may be able to determine the presence of a wormhole by analyzing the gravitational effects on the stars surrounding it and comparing this to historical data to highlight any anomalies.

Cosmologist Dejan Stojkovic of the University at Buffalo was quoted in the Daily Express as saying “If you have two stars, one on each side of the wormhole, the star on our side should feel the gravitational influence of the star that’s on the other side. The gravitational flux will go through the wormhole. So if you map the expected orbit of a star around Sagittarius A*, you should see deviations from that orbit if there is a wormhole there with a star on the other side.”

Scientists plan to sift through over 25 years of data in order to identify any anomalies in the orbit of these stars which could indicate the presence of a wormhole. However even if evidence is found, it still won’t be out and out proof that wormholes exist. Mr. Stojkovic clearly points out that whilst it might prove a probable explanation, we still possess an extremely limited knowledge and understanding of space, its properties and its capabilities, meaning that there could well be some other explanation that we simply don’t know about.

And for all of those space fans who are getting their hopes up about travelling through these wormholes, it looks like there is further disappointment. Mr. Stojkovic explains that even if wormholes are proven to exist, and are traversable, they would need to be stable and kept open with negative energy. Unfortunately, that is not within our scientific capabilities just yet.

Roman Konoplya, a RUDN physicist agrees with this and earlier this year was quoted as saying “For wormholes to be traversable and not to collapse because of gravitational effects, the repulsion force in the bottleneck of a wormhole should be extremely high. Some preliminary studies of foreign colleagues seemed to indicate the possibility of such stability. However, we confirmed that a wormhole according to Einstein’s theory with quantum corrections is critically unstable. Evidently, an unstable system cannot exist in nature as any reaction with the environment would cause it to disintegrate. Mathematically, it is expressed in unlimited growth of initially neglected minor system deviation from statistical balance. Unfortunately, these results mean that we still don’t have a theoretically consistent wormhole model without exotic assumptions.”

Further sad news comes from Daniel Jafferis, from Harvard University who earlier this year revealed that that real life wormholes were unlikely to gather the speeds seen in science fiction movies. He was quoted as saying “It takes longer to get through these wormholes than to go directly, so they are not very useful for space travel.”

So whilst the argument for wormholes continues to look promising, it may be a long while before we’ll be using them for human space travel!