You are here: Home1 / body armor 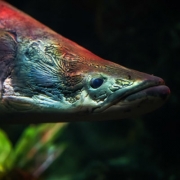 Arapaima gigas, also known as the Pirarucu Fish, has truly always been nothing short of a river monster. They are native to South America and mainly found in Brazil/the waters of the Amazon rainforest. The waters they are known to inhabit are also heavily populated with piranha fish, and while the pirarucu can grow to up to 10 feet in length, scientists are constantly curious as to how fish survive in waters so densely populated with predators.

This week, however, researchers from the University of California, San Diego and Berkeley, gained some groundbreaking information about the pirarucu’s defense system, that might even help us develop more effective body armor and aerospace designs. You read that right, a fish’s natural defense system might help assist humans in future aerospace designs. As previously stated these fish can grow to up to 10 feet in length, and up to 440 pounds! As if those two stats aren’t impressive enough, the fish can also breathe air and spend up to a full day outside of the water if it needed to. So it’s safe to say the pirarucu is already well equipped for defense, however, size doesn’t necessarily matter in this case scenario. Piranha’s may be smaller, but they’re equipped with teeth as sharp as razor blades, and a jaw that can bite up to 30 times its own body weight. The predators are actually known to take down fish larger than them, as they often attack their prey in groups and in a “frenzy” fashion, reeking utter chaos in any body of water they may live in. Which is why scientists were so curious as to how the pirarucu fish have coexisted with them as long as they have.

The first thing researchers normally look for in cases such as this, according to Reuters News, is some sort of armor that the animal has developed. All throughout history scientists have found dermal armor on various types of fish, mammals, and dinosaurs who are in environments with predators who use their sharp teeth as their weapon. So when they analyzed the pirarucu fishes skin only to discover it possessed the same qualities as a bulletproof vest, they weren’t surprised, but definitely in awe.

“It is true that the natural armor is similar to artificial body armor because of the similar scale overlapping system. However, the natural armor such as these fish scales is tough and much lighter, without impeding body flexibility and locomotion. Remember that the fish scales were developed through hundreds of millions of years. They are very advanced,” said Wen Yang, a UCSD materials scientist who helped lead the study published in the Journal Matter.

According to the published study, researches deeply analyzed the layers of skin and the scales of the fish. They found that the scales alone had a hard mineral outer layer, under that they found an inner layer of collagen which is tough but very flexible as well. These two elements layered on top of one another means that the scales can become deformed by a piranha bite, but they won’t be torn or ripped apart, which thus protects the pirarucu from detrimental injury.

“We were able to see how the collagen fibers deform without a catastrophic failure including the mechanisms of twisting, folding, sliding, stretching, delamination,” Yang said.

The study was backed by the U.S. Air Force Office of Scientific Research. The extensive tests done by the group of researchers concluded that the material in which the pirarucu’s skin is made up of is one of the toughest materials in the world that we know of. This is what could be beneficial to the future of how we create defense ware. Scientists hope to further work with and understand the scales structural make-up and transfer it to an artificial material that is man made and can hopefully be used in the future.