You are here: Home1 / book recommendations 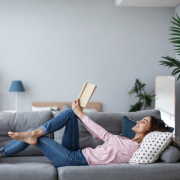 With news of multiple Covid-19 vaccines being distributed, it’s only a matter of time before life begins to return to a sense of normalcy. In the meantime, it’s up to us to continue to stay home and follow all health and safety procedures until we can get vaccinated. Now that it’s winter, one of the best ways to pass the time while you wait out the rest of the pandemic this season is reading! This month a ton of new reads have been released for the new year, here are some of the titles being talked about already:

King Of The Rising By Kacen Callender: This is the sequel to Callender’s popular novel Queen Of The Conquered, and follows former slave Loren Jannik as she leads a newly created resistance group. Together they attempt to take back their land from the Fjern; an invading group of individuals enslaving all of the island’s residents. This is the second book in Callender’s “Island of Blood and Storm” series.

The Chicken Sisters By KJ Dell’Antonia: In Dell’Antonia’s debut novel, 35-year-old widow Amanda Moore stuns her small Kansas town by marrying Frank Pogociello. For context, Amanda has spent her whole life working for her mom at Chicken Mimi’s, but now that she married Frank, she has to start working at Chicken Frannies, which is his family’s chicken restaurant. It just so happens that the two families are also sworn enemies and each other’s biggest rivals.

Mediocre: The Dangerous Legacy of White Male America By Ijeoma Oluo: Popularized for her novel So You Want to Talk About Race, Oluo is back with her newest book that aims to examine how privileged white men in western culture has created a dangerous environment for everyone else living in it with them.

The Mermaid From Jeju By Sumi Hahn: This historical fiction novel follows teenage Junja, a diver whose mother dies when they both switch places so that Junja can travel into the mountains on an important trading mission. Without her mother, and separated from the boy she loves, Junja must use all of her strength to complete this journey.

Layla By Colleen Hoover: When Leeds girlfriend Layla is brutally attacked by his ex, he finds it difficult to save the love he once had for her as she navigates her post-traumatic stress. In order to bring back their spark, Leeds books a Bed and Breakfast getaway for them both, but when another woman begins to become the object of his affection….well, you’ll just have to read to find out.

This Is How We Fly By Anna Meriano: 17-year-old Ellen is grounded for her last summer before college, greatly derailing all of her final summer plans with her two best friends. Desperate to leave the house, Ellen joins the local Quidditch league, and as she becomes more and more involved with the game, her old friends become figures of the past.

The Mystery of Mrs. Christie By Marie Benedict: After famous murder-mystery author Agatha Christie returns home after being missing for 11 days, she claims to have no memory of what occurred during her absence. The novel then begins to spiral down a rabbit hole of mystery and strangeness as Mrs. Christie’s journey begins to unravel.